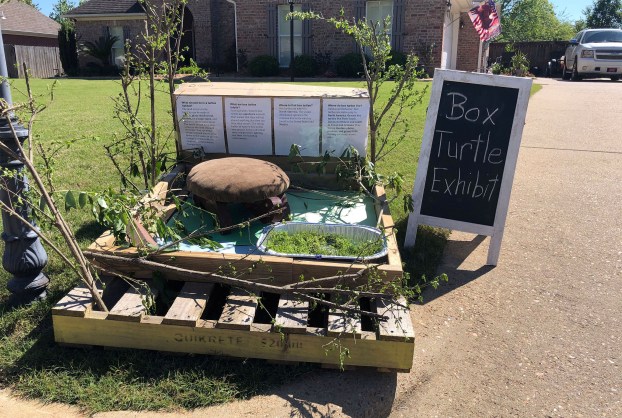 The quarantine life has lasted for nearly a month in Oxford, and families have been scrambling to find ways to keep their children entertained and learning.

One mom found a unique way to do both with what she calls the “Social Distance Zoo,” and gives all the credit to a friend she has known nearly all her life.

“I have to actually give credit to a friend that I met in preschool who lives in Michigan; they did it in their neighborhood,” local organizer Sarah Swauger-Light said. “I said, ‘Well, this is a great idea.’ I know we have some great community members, so I put out the post and asked if people wanted to join.”

Light put the post up on the Twelve Oaks neighborhood’s Facebook page, and ended up with 22 homes signed up to make an exhibit.

Each participating family wrote their address and which animal they would like to make an exhibit for.

The animals that were a part of the zoo included a beluga whale, a box turtle, an owl, sharks, kangaroos, monkeys, llamas, snakes, Bengal tigers, pandas and frogs.

Every family used stuffed animals around their home, and some even went the arts and crafts route and made the animal. Each exhibit also featured a supplemental information card about the animal they chose.

Once the exhibit was made, they were then set up in the front yards throughout the neighborhood. Families would then load up in their cars to go through the zoo while following the social-distancing guidelines. Some of the exhibits even had activity sheets that children could take with them.

“The people in our subdivision have done a great job of coming up with creative ways to entertain the kids,” said Morgan McNeill, a Twelve Oaks resident. “It really has been a community effort to make sure that all of the neighborhood kids are having fun and are able to get out of the house and engage in socially distant activities. Not only have my own kids enjoyed the zoo, but we have seen other families walk or drive by our house and are so excited when they see our exhibit. It’s been so much fun.”

The zoo was open on Wednesday and Thursday, which were the days selected with good weather forecasted.

With the new normal of children waking up and going to school in their living rooms, parents have tried to find the best ways to educate them, as well as provide unique forms of entertainment. Following Governor Tate Reeves’ decision to keep all Mississippi public school campuses closed the remainder of the current school year, the need for out-of-the-box thinking is at a premium.

Light is also a literacy specialist, and said she understands the challenge educators are also facing with the new normal.

“As I’ve gone around with my two-year-old son, we read all the signs and I’ve seen other parents doing the same with their small children,” Light said. “It’s a great opportunity to learn about all the animals and practice literacy skills and science skills at the same time.”