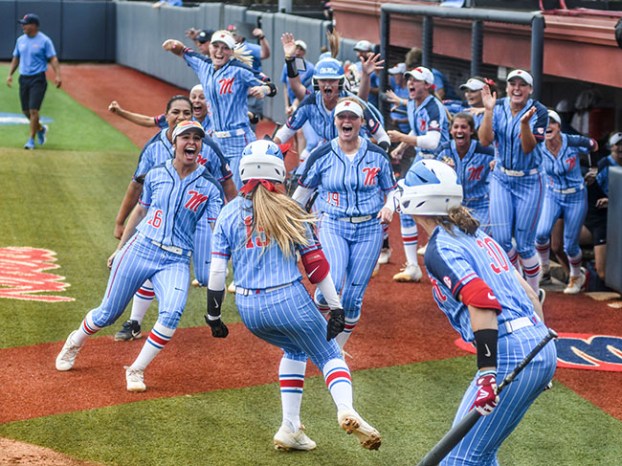 Mississippi players react as Kylan Becker (15) scores on a three base error by Louisiana-Lafayette in the NCAA Oxford Regional at the Ole Miss Softball Complex in Oxford, Miss. on Sunday, May 19, 2019. (Bruce Newman, Oxford Eagle via AP)

Cross Country and Track clean up at 2020 Rebels’ Choice Awards

Despite not being able to meet in person, Ole Miss Athletics celebrated another year of high achievement through a virtual iteration of the 2020 Rebels’ Choice Awards on Monday night.

For the second year in a row, men’s cross country and women’s golf came away with the Team of the Year awards after both claimed SEC titles in 2019. The Rebel men’s cross country team repeated as SEC Champions in dominant fashion, winning by the largest margin of victory since 2015 with a 55-point win over Alabama. The Ole Miss women’s golf team, meanwhile, claimed its first SEC title in program history thanks to an unforgettable final day of action, culminating in a playoff win against South Carolina.

Both Rebel teams swept the Coach of the Year category as well, with Kory Henkes claiming it for women’s golf and Ryan Vanhoy for men’s cross country. Women’s golf topped off an already stellar awards night by snagging Game of the Year (SEC Championship final) and Play of the Year as well, the latter courtesy of Macy Somoskey’s clutch long putt on the 18th green in the SEC final to keep Ole Miss alive and force a playoff.

The Most Valuable Rebel awards were bestowed upon All-Americans Kylan Becker (softball) and John Rhys Plumlee (football). Becker wrapped up an extraordinary Ole Miss career in 2019, becoming just the second First-Team All-American in program history after leading the SEC in hits (84) and setting Ole Miss single-season marks in runs (55), triples (9) and stolen bases (34), while also breaking the school record in career triples (16).

Taking home Rookie of the Year were baseball’s Doug Nikhazy and track & field’s Brandee Presley. Nikhazy, a Freshman All-American pitcher, set the Ole Miss freshman record with 86 strikeouts as part of a 9-3 overall record and a 3.31 ERA. Presley won two medals for Team USA at the 2019 Pan-American U20 Outdoor Championships last summer, winning gold as the anchor on the U.S. 4×100-meter relay team, while also taking bronze in the 100-meter dash. Presley also has a U.S. U20 title to her name in the 100-meter dash and has toppled three different school records during her time as a Rebel.

Scholar-Athlete of the Year was given to women’s tennis’ Tereza Janatova and men’s track & field’s Andrew Raspo. In order to be considered, student-athletes must have a GPA of at least 3.5.

Janatova’s teammate Grace Anne Jones was named the 2020 winner of the Bennie Abram Award, which is given each year to a non-scholarship student-athlete with a GPA of at least 3.0 who exhibits great character through their actions on and off the field. The award is given in honor of former non-scholarship athlete, Bennie Abram, who tragically passed away during an offseason workout.

For the fourth straight year, the Ole Miss men’s tennis team was named the men’s Chancellor’s Cup winner, which is given annually to the team with the highest GPA. The Rebel women’s cross country team came away with the honor on the women’s side.

It was a similar streak in the Community Engagement award, as the Ole Miss women’s basketball team earned its fifth-straight honor, while the Rebel baseball team won for the third consecutive year.

After 26 years of service, Ole Miss football equipment manager John “Possum” Ross was awarded the 2020 We Are Ole Miss Award, which recognizes an unsung faculty or staff member for their dedication to Ole Miss student-athletes.

The Rebels’ Choice Awards were started in 2011 as a way for the Ole Miss Athletic Department to celebrate National Student-Athlete Day, which is held each April. The semi-formal event, which traditionally features a red carpet, was held at the Gertrude C. Ford Center for Performing Arts until the opening of The Pavilion at Ole Miss in 2016, and honors athletics achievement from the past year. The Rebels’ Choice Awards includes 15 categories in which the winners are selected by the Ole Miss Student-Athlete Advisory Committee.

Bennie Abram Award: Grace Anne Jones, Women’s Tennis
*Given annually to a student-athlete with a GPA above 3.0 in honor of former non-scholarship football player, Bennie Abram

More than 30 cars turned out on Monday evening at Oxford Middle School for a virtual honors ceremony to recognize... read more