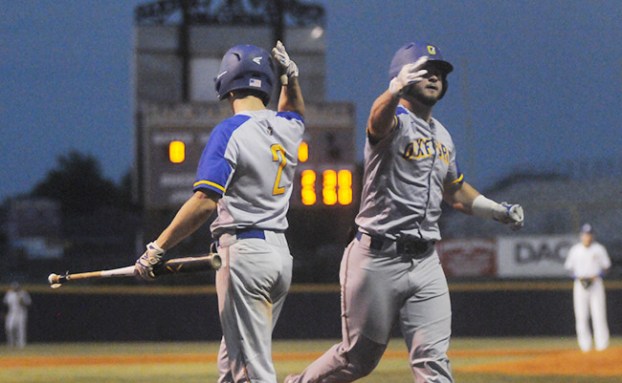 Oxford High's Drew Bianco (1) hits a home run and is congratulated by teammate Sam Bianco against Desoto Central in MHSAA Class 6A baseball playoff action in Southaven, Miss. on Thursday, May 10, 2018.

As first reported by Brody Miller of The Athletic, Louisiana State University’s Drew Bianco has entered his name into the transfer portal.

The Oxford native and son of Ole Miss head baseball coach Mike Bianco will not be back at LSU come fall.

By entering the transfer portal, Bianco can now legally be contacted by other coaches who desire to bring on the man who played two seasons in Baton Rouge with the Tigers.

A freshman in the 2019 season, Bianco played in 39 names, making 16 starts. However, he only hit .178, despite showing some pop with three home runs and three more doubles. Through a shortened 2020 season, Bianco was struggling hat the plate again, hitting 0.74 through a short sample size of only 11 games.

As a senior at Oxford High School, Bianco helped lead the Chargers to two state championships. He was voted the Class 5A Player of the Year in 2018 when he batted .409 with six home runs and seven doubles.

In the past, the elder Bianco has insisted that he preferred his sons to leave Oxford and make their baseball careers beyond Swayze Field. Time will tell if that mantra still holds true.

Gray Spencer discharged from rehab facility on his 22nd birthday

Gray Spencer turned 22 years old today, Wednesday, April 22, and he got the best birthday gift of his life.... read more