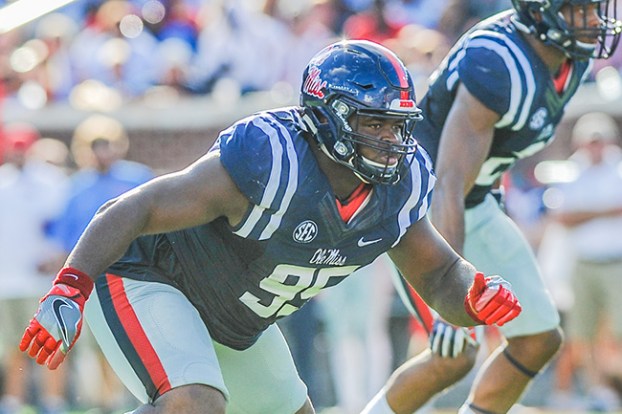 Defensive tackle Benito Jones (95) was one of 11 true freshmen to play for Ole Miss in 2016 and one of seven to start at least one game. (Bruce Newman)

The 2020 NFL Draft is going to look a little different for Ole Miss fans.

The NFL cancelled plans to hold the draft in front of a live audience in Las Vegas amid the coronavirus outbreak, now holding the entire thing remotely using a virtual draft software. So, everyone’s going to see things differently, but how it’ll unfold differently from the Rebels fan perspective is due to a lack of Day 1 talent.

2020 will be different. Barring wildly unforeseen circumstances, no Rebels will be taken in the first two rounds. It’s very unlikely that any will be taken in the first three rounds. That said, there are going to be a handful of former Rebels who will get their name called and have a chance to fulfill their NFL dreams. And there will likely be a few more undrafted guys who get a shot as an undrafted free agent.

Here’s how the Rebel big board shapes up entering Thursday’s opening rounds.

Projections for Phillips are all over the board. He didn’t test incredibly well athletically with the exception of putting up 29 bench press reps at the combine, good for the 97th percentile of running backs tested.

“He could challenge for a spot as a RB3 but might need to prove he can handle special teams and/or third-down duties to improve his chances,” said NFL.com analyst Lance Zierlein.

Jones, former five-star recruit, had his best season as a senior. Recording 5.5 sacks from the nose tackle position, he also added 10 tackles for loss.

“When the tape is on, it’s impossible not to notice Jones making things tough for SEC offensive linemen,” Zierlein said. “He possesses average power at the point of attack but can really be disruptive when he’s actively attacking the gaps.”

Despite solid numbers, pure athleticism could cause Coatney to fall. He tested no better than the 12th percentile among defensive linemen in each of the 40-yard dash, vertical jump, broad jump, 3-cone drill and the 20-yard shuttle at the combine.

“Against NFL competition, however, his lack of body control could limit his effectiveness. He lacks two-gap consistency at the point of attack and may not have the traits for upfield disruptions,” Zierlein said.

On the draft bubble:

Of all the Rebels who could be drafted, Sheppard’s athletic testing numbers are without a doubt the best. Running a 4.83-second 40-yard dash with a 115-inch broad jump and a 28 bench press reps at 261 pounds is impressive, but his 2019 numbers were not. Sheppard recorded only two tackles for loss and 25 total tackles in all of 2019.

Very unlikely to be drafted, but could draw training camp interest:

Cross Country and Track clean up at 2020 Rebels’ Choice Awards

Despite not being able to meet in person, Ole Miss Athletics celebrated another year of high achievement through a virtual... read more