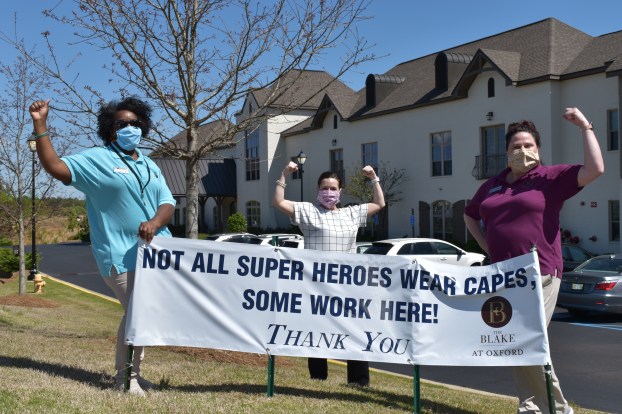 Not All Heroes Wear Capes: The Blake at Oxford goes above and beyond

How does one protect the most defenseless people while not making their lives meaningless and dull? How do those inexperienced with technology interact with their families when they can’t physically see their families?

Those are the questions the crew at The Blake at Oxford have been working to answer over the past month during the onset of the COVID-19 pandemic.

“Everything is different than normal,” said Morgan Walter, executive director of The Blake at Oxford. “We have a fantastic team and really, really good residents and families as well. Everybody comes to work with the same goal in mind: to make the residents enjoy that they live here.”

Families can no longer visit their loved ones at the Blake. What’s also been cut is gatherings within the building.

Groups of residents no longer gather for activities or exercise classes, and even meal dynamics have changed.

“We took advantage of getting to see each other every day, at mealtime and activities and such,” Walter said. “And that’s not happening very much anymore. I’m very lucky that all of the staff has embraced this as much as they have.”

The most popular activity week-to-week among residents at the Blake is Happy Hour.

Now, staffers decorate a rolling cart with individual charcuterie plates for the residents. They take the rolling cart door to door, handing out the dishes and pouring a glass of wine for residents at their door.

The other part of the dilemma is, how are they bringing residents and their families together?

The Blake purchased an iPad to allow residents to video chat with their families, and some have also come by and drawn pictures or taped notes on the outside of resident’s windows.

They’ve also managed a way for a more intimate interaction.

“We’ve even done what I call window visits,” Walter said. “Essentially, families arrange a time they can come, and there’s a special sitting area outside the therapy gym which has glass windows. So, we’ll put the residents on the inside and family members on the outside, and you can usually hear pretty well through that glass.”

One particularly vulnerable population is those in the Blake’s memory care wing. For those suffering from neurological issues, not seeing their loved ones for extended stretches – the people with whom they’re most familiar – can be especially detrimental.

“It can wear on that population even more, which is why we’ve put so much energy into making sure these families still get to visit each other. It can’t be that face-to-face, sitting beside each other, but you can still communicate through one of these methods we’ve been talking about,” Walter said. “For them, we try and plan and schedule things out a little bit more, just because that planning is even more important for the memory care population, for sure.”

A combination of ensuring safety of the residents while making their lives still exciting is something that has caught the eye of upper management. The tactics employed in Oxford have drawn notice from the property’s parent company as a whole.

“Morgan and her whole team that leads that community has done a tremendous job, just in communication to the family and keeping the residents and the staff engaged,” said Scott Hames, the Senior Vice President of Operations at the Blake Management Group. “The entire Blake at Oxford team, really, has just gone above and beyond in the past few weeks.”

“None of us know where the virus might be lurking. There is that fear of coming to work, especially if you’re working amongst other people,” Walter said. “But my staff has just been so dedicated. I couldn’t ask for a better staff.”

Dr. Eric Dahl, a family physician in the LOU Community, has one message he’d like to share: at this point,... read more