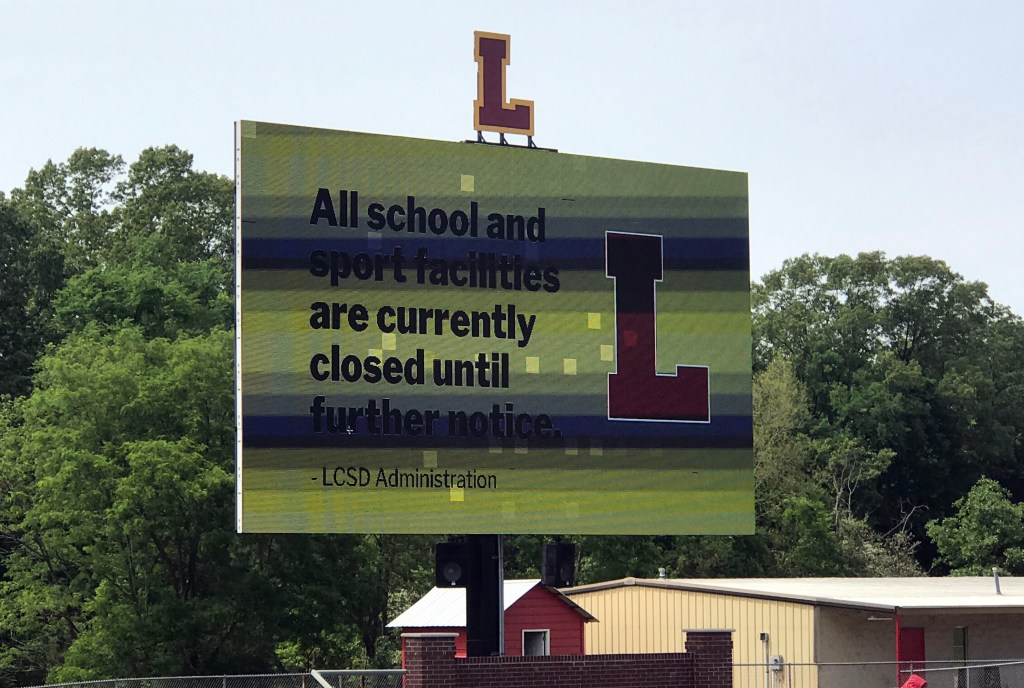 The scoreboard at Lafayette’s William L. Buford Stadium displays a sign stating all Lafayette County schools and athletic faclities are closed due to COVID-19. Local football coaches are adapting to not having spring football practices this year. (Jake Thompson/Oxford Eagle).

Late April and early May is usually when the high school football bug returns to Mississippi, as teams are allowed to return to the field for spring practices.

This year, however, is one that has turned the high school athletic calendar upside down due to the COVID-19 pandemic, and football programs are the latest to feel the effects.

When the Mississippi High School Activities Association officially canceled the remainder of the spring season on April 15, it included 15 spring practice days and a spring game allotted to football programs.

Losing those two-plus weeks’ worth of practices brought along different issues for Oxford, Lafayette and Water Valley’s programs.

For the reigning Class 6A state champion Chargers, it meant not being able to carry the momentum from winning their first state championship in December to the spring and into summer and preseason workouts.

“We’re continuing to have position meetings, virtually,” Oxford head coach Chris Cutcliffe said. “There’s no normalcy to what’s going on, but we’re trying to make the most of it. … Normally, we’d be entering a really important phase. If you’re looking at a year of football and getting a 2020 team ready, spring practice is an important phase for each person individually.”

Cutcliffe said he and his staff have been sending home workouts to the players through a software system they use in the weightroom even when school is in session. Both Lafayette and Water Valley’s staff provided workouts for their players to do at home as well.

During spring break, school districts announced there would be an extended break, which turned into school buildings staying closed for a few weeks and eventually remaining closed for the rest of the current school year.

Lafayette’s William L. Buford Stadium looks like soccer practices were interrupted mid-swing, with goals still sitting on the field and other football equipment still where it was left, as coaches and players have not been able to return.

Once it became clear that in-person instruction was not going to happen again this spring, Lafayette head coach Michael Fair said he began meeting with his staff to formulate a long-term plan.

“At that point, we had a coaches meeting and I said, “Hey look, we need to have a plan,'” Fair said. “I don’t know if anybody had a plan for distance workouts or team meetings or anything like that, but we just had to kind of come up with one on the fly that fits our personality and our kids’ personalities.”

Nearly two seasons removed from winning their first state championship in 2018, Water Valley was entering 2020 with a lot of change. Gone is quarterback Jacob Truss, who led the Blue Devils to their 2018 Class 3A state title and is graduating this spring.

The Blue Devils will be young across their roster this fall. Head coach Brad Embry said he usually relies on spring and summer workouts, including 7-on-7 tournaments to get their quarterbacks and receivers in rhythm. Losing spring this year will set them back, but not as much as programs losing an entire summer on top of it.

“It’s unique for sure,” Embry said. “We’re guessing right now. If we could get a full summer in, even though we didn’t have a spring, I would feel fairly comfortable with that. You can do a lot now in the summer and we have a stable coaching staff and a lot of kids that have come up through junior high in our system. If, because we’re going to be relatively young team next year, if we don’t get our kids (out there before) Aug. 1, we’re going to have to really do some different things. If we have to wait until Aug. 1, then I don’t know what we’re going to do.”