Carter: July 1 is an “important date” regarding return of student-athletes 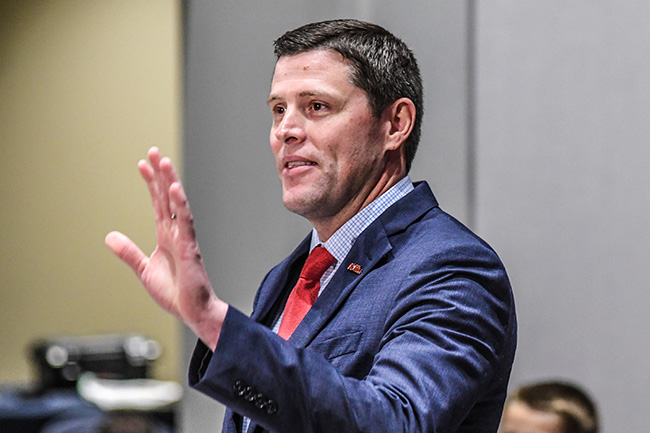 There is still plenty of uncertainty regarding when public schools and universities may open their doors again due to COVID-19, but Ole Miss athletics director Keith Carter has a date in mind for when that could happen for student-athletes.

During an introductory press conference via Zoom for new Rebels softball coach Jamie Trachsel on Tuesday, Carter took questions about when he thinks athletes, especially those who play fall sports, could potentially return to campus.

The Southeastern Conference has not made any firm plans toward essentially reopening their conference, while states begin their own reopening process after the entire country has been quarantined for the past two months.

“We’ve spent a lot of time the last couple of weeks talking about (reopening),” Carter said. “We have 11 states in the footprint of the SEC. What we’d love to do, and really what we’ve done since about March 13 when all this started, is we’ve made a lot of decisions at the conference level that have affected all institutions and all athletic departments. We would love to continue to do that.”

The SEC has been closed down since March 13, when they suspended all spring competitions, practices, individual and team workouts. The University of Mississippi closed its doors on all campuses on March 16, when spring break was scheduled to end and the spring semester was to resume.

The Institutions of Higher Learning announced on Tuesday the formation of a Safe Start Task Force, which will work toward forming a plan for starting and completing the 2020 fall semester in the safest and most effective way. Each of the eight public universities will have two representatives on the task force.

Ole Miss canceled in-person programming on all its campuses through Aug. 1, which included sports camps, but did not specifically mean student-athletes could not return for workouts when able. With the college football season looming and constant reports of other head coaches across the country worried there will be a season without fans or even no season at all in 2020, Carter said he has one important date in his head to allow fall sports to resume on time and as scheduled: July 1.

“But we also know, just based on the cases and where states are with COVID and those type of things, some are going to open sooner than others,” Carter said. “We’re seeing Tennessee opening restaurants. Georgia’s opening up. They’re going to open up sooner, so we’ve got to talk about that. We want to be equitable, but we’re talking on our campus about a way to bring our student-athletes back in the summer. That’s important for us. If we want to get the fall started on time – and that’s our goal – we’ve got to get these students back, get them back in shape. That July 1 date is the one that’s kind of standing out. If we get too far past that, it’s going to be hard, maybe, to start on time. We’re looking at some things there.”

No plans are currently in place for any students to return to campus as of right now, but the plans are already at the very least being formulated, in case Carter is given the green light to do so at some point this summer.

Carter also noted there are currently no plans to relocate the Sept. 5 game against Baylor in Houston, Texas at this time.