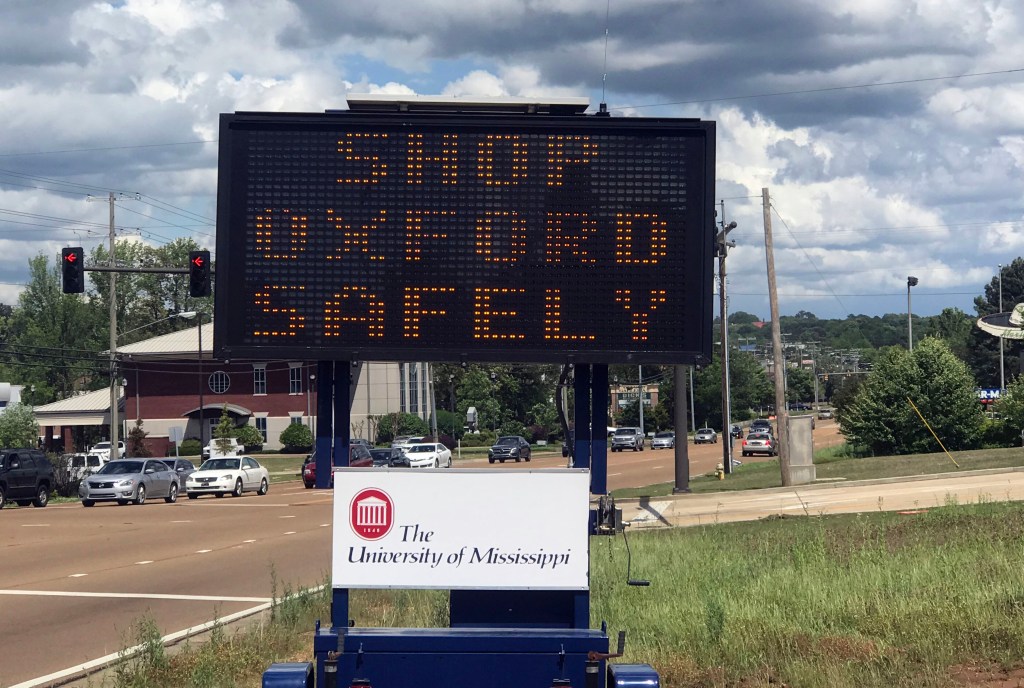 A sign is placed at the entrance of Jackson Avenue East announcing retail stores are reopened as part of Phase 1 of the “Serving Oxford Safely” recovery plan. (Jake Thompson/Oxford Eagle)

When the Oxford Board of Aldermen voted to begin Phase 1 of the “Serve Oxford Safely” recovery plan this week, many local businesses breathed a heavy sigh of relief.

After weeks of providing curbside service, which turned into local deliveries only, Oxford’s small businesses dusted off their counters and opened up their doors once again on Wednesday morning.

The Board voted 6-1 in favor of a fifth COVID-19 emergency resolution during a special meeting on Tuesday. The new resolution allowed select businesses to open their doors at 8 a.m. on Wednesday, while still following social distancing guidelines and mask requirements.

Under Phase 1 of the city’s recovery plan, all retail, office and general business, childcare services, medical and health services and pharmacies are allowed to reopen by following the guidelines in the recovery plan. All other businesses must remain closed, either because they are not included in Phase 1 or because they are included in Governor Tate Reeves’ latest executive order, which went into effect on April 27 and expires on May 11.

Retail stores must limit guests to only 30 percent of their normal capacity, or five customers for every 1,000 square feet.

Other businesses that are not allowed to be open include: barbershops; hair, nail and tanning salons; exercise and training facilities and entertainment venues. Organized team sports and outdoor recreation are also not allowed to resume under the current order.

Being able to open on Wednesday came not a day too soon for Bad Eddy’s Hobbies and Collectibles co-owner William Glasgow. The local comic book and collectibles store had relocated to its new location at 463 Highway 6 East for only a week before being forced to close last month.

Prior to closing, Bad Eddy’s had closed its doors for a month and a half while moving to the new store across town.

“It’s been rough,” Glasgow said. “The City allowing us to do curbside at the beginning, that helped. Then stopping curbside, I mean, we don’t really have the machinations to do online (service). We haven’t been able to do that our first year. That was difficult.”

Glasgow opened his doors at 4 p.m. on Wednesday for a four-hour period and had a handful of customers return to the store the first day. Due to other states not reopening, or reopening enough to allow for distributors to ship items, Glasgow said Bad Eddy’s will be low on new items until close to June.

When they moved to the new location, Glasgow said Bad Eddy’s had paid their first two months’ rent upfront and were set for March and April. If they were not able to open their store back up when they did, he said, May’s rent would have been questionable.

“At the very least it’s like, ‘Oh, we can actually go in and take a look,'” Glasgow said. “Of course, the big thing is all of our distributors have shut down except for one. So, we can get card products and some board games, but we can’t get new comics until May 20, which is like half our business.”

Stores around the Downtown Square also faced hardships during the shutdown. Most were able to shift to online shopping, and turned to social media as a way to continue their business.

Neilson’s Department Store general manager Lane Wilson used the store’s Instagram account to sell merchandise while closed. When Neilson’s opened their doors on Wednesday, they did so with a welcome back sale to help bring in customers.

“I think it’s going to take a little time for everybody to get comfortable getting back out,” Wilson said. “Of course, without the students here it’s just primarily the townsfolk, and I think they just have to get used to (stores) being open. Now, we have had a lot of people just be thankful to get out and have a place to go again. To give them some sense of normalcy.”

Some stores around the Square are still choosing to hold off on opening their doors again. The End of All Music resumed its unique curbside service by lowering a makeshift dumbwaiter from the balcony, but is choosing to wait on allowing customers inside due to the intimate space and how much of their shopping involves touching records.