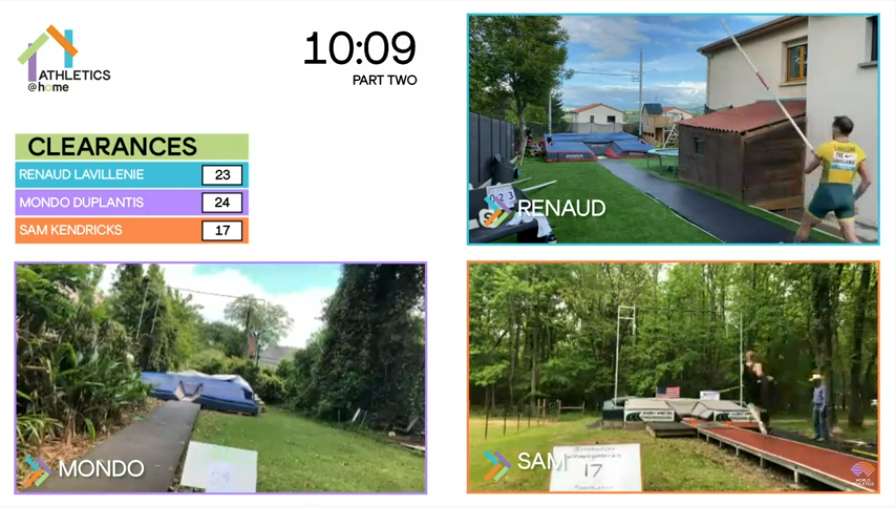 Sam Kendricks, Mondo Duplantis and Renaud Lavillenie competed in the first Garden Clash from their own backyards across the world on Sunday, May 3, 2020.

The sports world has been on pause for nearly two months due to the COVID-19 pandemic.

While some organizations have provided a sense of normalcy, with NASCAR dipping into the world of iRacing as drivers wait to return to the track later this month, live competition has been absent.

That changed when Oxford native, and reigning world champion, Sam Kendricks joined two of his closest friends and competitors to provide the first live competition on a global stage, right from their backyards.

The first Ultimate Garden Clash – Pole Vault Edition took place on Sunday, emanating from Mississippi, Louisiana and France. Kendricks, along with Mondo Duplantis and Renaud Lavillenie, competed to see who could complete the most vaults at five meters in a 30-minute span.

“The thing that made it cool was that World Athletics company, their media team, didn’t have anything to do. There (were not events) to publicize,” Kendricks said. “So, they picked up our event. But they couldn’t send us a production crew, so they had to teach us to do all the things that we needed to do to broadcast the event.”

With the help of family members acting as personal score keepers, and an iPad or computer, the event was broadcast on several platforms including World Athletics’ YouTube, Facebook and Twitter accounts.

All three competitors had a similar idea to one presented on Sunday, but it was Lavillenie who pitched idea, according to Kendricks.

“If anybody was going to call me with this idea (it was going to be Lavillenie),” Kendricks said. “The truth is, not everyone can put something on like this. Myself, Lavillenie and Mondo are the only guys around the world, really, that have a private pole vaulting facility. It’s kind of like having your own batting cage. Not everyone is going to have that.”

Kendricks’ personal training facility is located on his family’s property in Oxford, while Duplantis competed at his parent’s home in Louisiana and Lavillenie competed in the backyard of his home in France.

There were two 15-minute periods where each vaulter attempted to clear the five-meter height as many times as possible, with a five minute intermission period in between.

This was a new endeavor for Kendricks, who said he would do this kind of activity while training on his own, but never attempted a sort of sprint competition where he had to complete as many attempts as possible in a set time.

“We didn’t want to make it too complicated or too showy, so that people wouldn’t think that we weren’t locked down the same way that they were,” Kendricks said. “So, it was supposed to be a humbling thing. Rather than being in a stadium in front of 50,000 people, well, we’re just in our backyards using our iPhones to film it.”

Nobody knew what the finished product would look like until it began on Sunday. The event “touched over 8 million viewers, in some regard,” according to Kendricks, who deemed it a “huge success.” Kendricks said he is open to them holding another Ultimate Garden Clash, but maybe involving other vaulters instead of a rematch with Duplantis and Lavillenie if the powers that be ask for another event down the road.