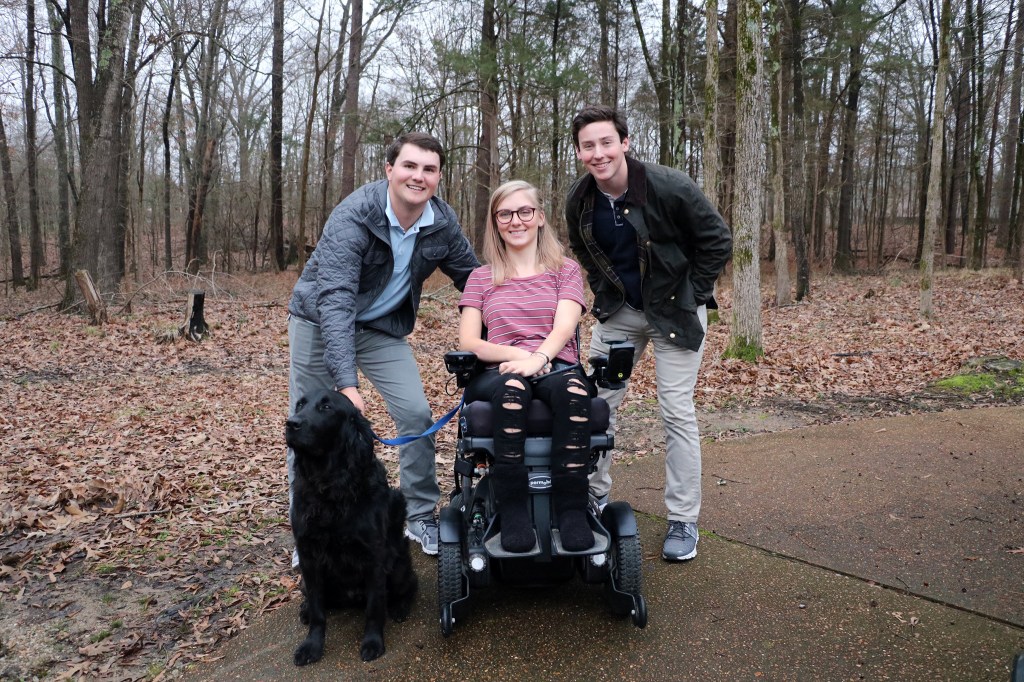 Sigma Nu fraternity members Ford Gordan, left, and Nathan Foxworth, right, visit with Emmie Brookins, center, earlier this year. Brookins was the recipient of the mone raised from this year’s Charity Bowl fundraiser. The fundraiser went virtual this year due to the COVID-19 pandemic. (Courtesy of Nathan Foxworth)

The Epsilon Xi chapter of Sigma Nu at Ole Miss holds the Charity Bowl every year – every normal year, that is.

Along with everything else in 2020, the COVID-19 pandemic altered the fraternity’s major philanthropic event, changing it from their annual spring football game to a virtual fundraiser. However, despite all the unplanned obstacles and the cancellation of the Charity Bowl, Sigma Nu raised $168,000.

Once the spring semester was cut short and the campus shut down following spring break, Sigma Nu’s philanthropy chairmen Nathan Foxworth, Cole Barnhill and Ford Gordon were forced to adapt how they would handle their largest fundraiser of the school year.

In a normal year, the Sigma Nu would play a charity football game inside Vaught-Hemingway Stadium against another fraternity who bids for the opportunity to play against them – another fundraising outlet. During the game, there would be t-shirts for sale and other events; those proceeds go toward the fundraiser as well.

Due to the pandemic, a football game was out of the question.

The fundraising efforts begin in the fall, which provided the fraternity with a good head start, but once the spring semester was interrupted, their strategy had to change.

“We had a pretty good start on fundraising, but we made the decision to not stop it and cut short because we knew we owed that to (our beneficiaries),” Foxworth said. “We decided to continue on and we actually had some pretty good success despite everyone not being in Oxford but in their home towns. … It slowed down more than it would in a normal year, but we were still able to raise what we wanted to raise, and that’s really just a testament to our active chapter and all the work they put in.”

Relying on getting their message out through their website and posting videos through social media helped them reach potential donors. The fraternity also got a little extra boost from their members having an extended stay in their home towns and reaching out to their respective communities.

“I think the whole pandemic situation itself, people were kind of looking for a feel-good outlet, and I think we were able to provide that this year,” Barnhill said. “As people went home, that helped us get more donations after face because, one, the social media influence was obviously heavier because people were spending more time on that. We did see an increase in donations from families and that kind of thing, because they were looking for some sort of positive news in this time.”

Each year, the fraternity selects someone to receive a large portion of the money raised in the Charity Bowl. This year’s selection of Brookins hit close to home for the chapter.

“This year was pretty unique, because we have an active member who’s a first cousin (to Brookins),” Foxworth said. “Really, the whole chapter just gathered around them and her and were moved by her story.”

The fraternity intends to continue to be involved with Brookins in the future and have her come to next year’s Charity Bowl to be recognized, since this year’s was canceled due to the pandemic.

With the unknowns surrounding the fall semester and if campus will reopen in August or not, the fraternity is beginning to plan for 2021’s event as if it will return to Vaught-Hemingway Stadium as scheduled or if it will be another virtual fundraising campaign. Foxworth and Barnhill will remain as philanthropy chairs for their senior year, while Gordon graduated this year.