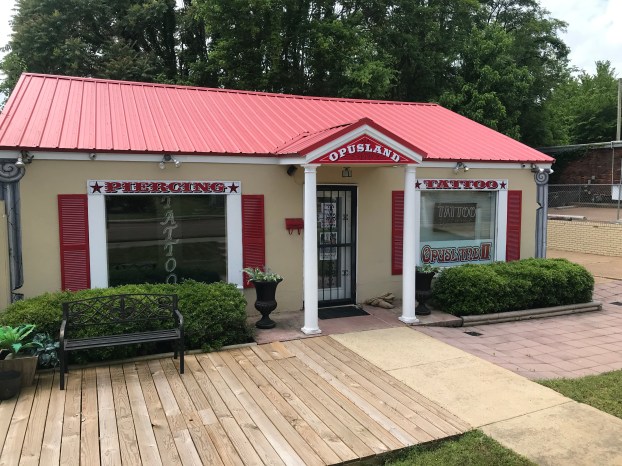 Opus Land and other tattoo parlors in Oxford were forced to close their doors again after being alloed to reopen on Monday. (Jake Thompson/Oxford Eagle)

Tattoo Parlors forced to close after being allowed to reopen

Tattoo parlors were one of the many businesses allowed to reopen in Oxford under strict guidelines earlier this week, but they were not supposed to.

Due to some confusion in Governor Tate Reeves’ Executive Order 1480, the Oxford Board of Aldermen voted to open tattoo parlors, along with other close-contact services, during a special meeting last Saturday.

Reeves’ order reads that “Executive Order 1477 is amended to allow salons, barbershops and other personal care and personal grooming facilities (collectively ‘salons’) to open subject to the following limitations…”

On Monday, Reeves’ office contacted Oxford Mayor Robyn Tannehill to inform her that tattoo parlors were not included in the latest order allowing barbershops and hair salons to open, along with other close-contact services such as nail and tanning salons.

“As our Board has considered reopening of businesses, we have always categorized ‘close-contact services’ altogether,” Tannehill told the EAGLE. “This category included barbershops, hair salons, nail shops, massage therapy salons, aesthticians, tanning salons and tattoo parlors in our plan. Since only hair salons and barbershops were specified in the Governor’s plan, we interpreted that all of these types of services were allowed.”

Municipalities across the state are allowed to add stricter guidelines than the ones imposed in Reeves’ orders, but they can not have guidelines that are more lenient than the state’s. Oxford allowing tattoo parlors to open would have done that.

Tannehill said she and the aldermen “personally” visited with each tattoo parlor owner in Oxford on Monday and apologized for their “false start information.” She also stated each shop understood.

Despite city officials speaking with the local tattoo shops, some businesses were still upset and confused as to why the City allowed them to open, only to be closed down hours later.

“It appears there has been confusion on the opening of tattoo shops and according to the Mississippi State Department Of Health, we were not cleared to open by the governor,” A post by Opus Land tattoo shop’s Facebook post read. “To say the least we are just as confused as everyone else.. we apologize to everybody who was looking forward to getting in today but more than that we appreciate each and everyone of you! Please remain patient as we get to the bottom of this. Again thank you everyone your business is very important to us!”

The shop is also encouraging its customers to call Reeves’ office and ask why they are being “discriminated against,” according to a Facebook post on Tuesday.

Executive Order 1480 runs through 8 a.m. on May 25, which would be the earliest tattoo parlors would be considered to reopen, unless Reeves amends his latest order in the next two weeks.

What’s for Dinner: List of Oxford Restaurants that have reopened or remain closed

The Eagle will compile a list of Oxford restaurants that are open for dining room service, drive-thru and delivery only... read more