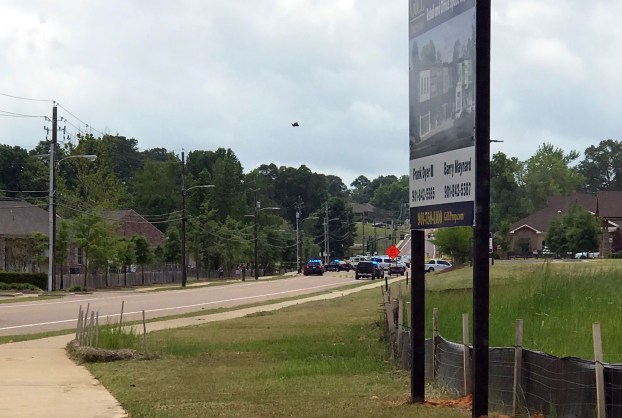 An Arkansas woman is being held without bail in connection with the May 15 shootout with U.S. Marshals in Oxford following a pursuit on Friday, May 15, 2020. The incident occurred near the South Lamar Boulevard and Azalea Drive intersection. (Jake Thompson/Oxford Eagle)

A man who was wanted in connection with an Arkansas murder was shot and killed following a pursuit in Oxford on Friday.

At approximately 11:30 a.m., Hunter Carlstrom, 33, was shot and killed by US Marshals on South Lamar Boulevard. The incident occurred near the Azalea Drive intersection and the Oxford Farms subdivision sometime late Friday morning.

According to the Mississippi Bureau of Investigation, a deputy US Marshal was attempting to execute an arrest warrant for Carlstrom. The deputy was part of a team looking for Carlstrom.

Preliminary information indicated that Carlstrom produced a handgun and fired upon the team when they approached his vehicle and asked Carlstrom to exit it. In response, officers fired back and struck Carlstrom.

KAIT, out of Jonesboro, Ark., reported that Carlstrom’s wife, who was in the vehicle with him, was apprehended at the scene, according to US Marshal Bob Clark. MBI did not confirm that information.

A US Marshal was shot in the exchange with the suspect and was taken to Baptist Memorial Hospital-North Mississippi. The EAGLE spoke with Sergeant Joe Miller of MBI out of Batesville, who could not provide an update on the officer’s condition.

The Mississippi Bureau of Investigation is in charge of the investigation. The United States Marshals Service and MBI were originally going to host a press conference on Friday afternoon, but canceled it.

Lafayette assistant baseball coach Jordan Poole was with his wife, Lafayette volleyball coach Kelsi Poole, at Children’s Clinic of Oxford for a checkup appointment when the incident began.

Poole said he had walked outside to put his daughter in her carseat and heard what he described as a “light argument.” Then Poole said he heard sirens that made him think first responders were responding to a fire nearby.

“I heard those voices getting louder, and when I turned the corner, it was literally what you see in a movie scene,” Poole said. “They had the main suspect’s car pulled to the corner of road, kind of pinned so he couldn’t (escape). I don’t know how many, but there were officers with their guns drawn and by that time, I’ve got my daughter in my hand, and so I go back inside.”

Once Poole heard the officers yell for the suspect to get their hands up, he went back into the pediatrician’s office. As soon as he got back inside, he said he heard “probably 10 or 12 shots” fired.

“Nobody in Oxford expects anything to happen, so the people inside were nonchalant. I’m the only one somewhat in a panic,” Poole said. “I told them, ‘That’s gunshots,’ and they got everybody in (windowless) rooms.”

The suspect was wanted for capital murder in connection with a homicide in Lawrence County, Ark., which occurred earlier this month, according to MBI. The names of the deputy marshals involved in the shooting will not be released until the conclusion of all investigations surrounding the incident.

This is a developing story, and more information will be provided as it becomes available.

With high schools shifting to virtual graduation and putting a bow on the current school year, administrators must now look... read more