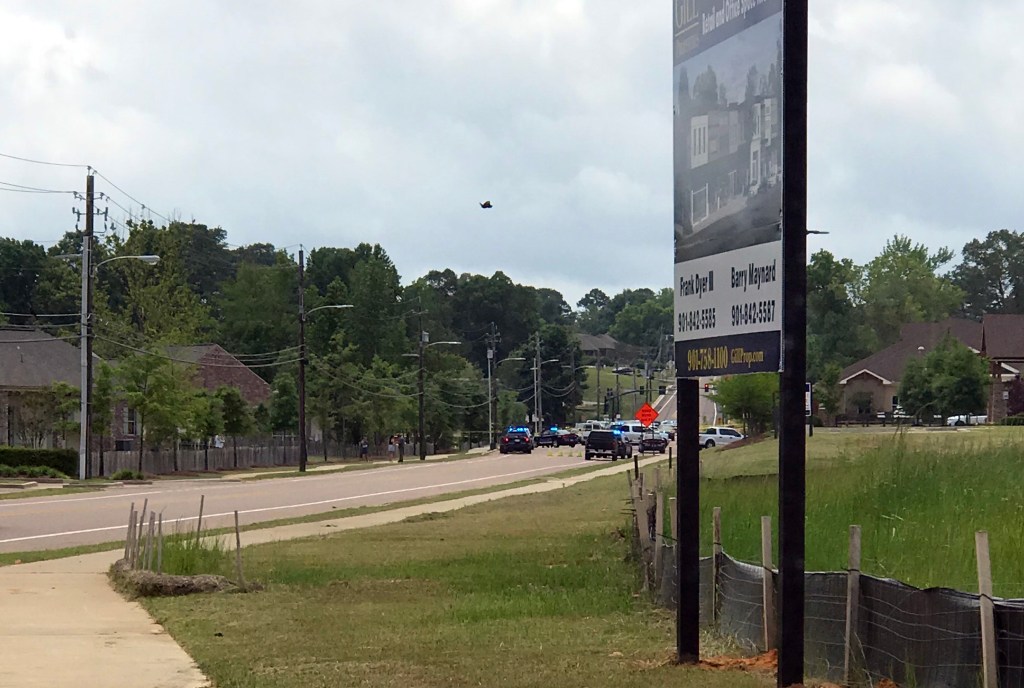 An Arkansas woman is being held without bail in connection with the May 15 shootout with U.S. Marshals in Oxford following a pursuit on Friday, May 15, 2020. The incident occurred near the South Lamar Boulevard and Azalea Drive intersection. (Jake Thompson/Oxford Eagle)

An Arkansas woman is being held without bond on charges in connection to the shootout that resulted in one man dead and a Deputy U.S. Marshal injured.

Xaveriana Cook, 23, appeared in U.S. Magistrate Court on May 20 for a preliminary and detention hearing on multiple charges stemming from the incident that occurred on South Lamar Boulevard on May 15. U.S. Marshals were attempting to execute an arrest warrant on Cook’s boyfriend, Hunter Carlstrom, who was facing a capital murder charge in connection to a homicide in Arkansas.

Carlstrom was wanted for the murder of James Sartorelli, also known as “Caveman,” who was killed with a gunshot wound to the head in his Smithville, Ark. residence on May 5.

Testimony during the hearing revealed that Carlstrom and Cook were together in Cook’s vehicle on May 15 when members of the U.S. Marshals Gulf Coast Regional Fugitive Task Force conducted a traffic stop on the vehicle in an attempt to arrest Carlstrom on the outstanding murder warrant.

During the traffic stop, Carlstrom shot a Deputy U.S. Marshal, who sustained internal injuries as a result of the gunshot wound and required emergency surgery. The deputy was identified as Bob Dickerson by Oxford Mayor Robyn Tannehill when she spoke of the incident during Tuesday’s Board of Aldermen meeting.

Carlstrom was shot by return fire from law enforcement and was pronounced dead on the scene. Cook, who had been driving the vehicle, was taken into custody and transported to the Lafayette County Detention Center.

According to posts on Cook and Carlstrom’s social media pages, it appears Cook is pregnant with Carlstrom’s child.

During the hearing on Wednesday, evidence was presented that Carlstrom told Cook of his plan to kill Sartorelli and rob him of drugs, guns and cash and that he used Cook’s vehicle to travel to Sartorelli’s residence and commit the murder. Upon returning, Carlstrom told Cook he killed Sartorelli, and Cook observed Carlstrom in possession of firearms, cash and drugs.

Sartorelli’s body was found by law enforcement officers in Arkansas on May 7 and an Arkansas Circuit Court issued a warrant for the arrest of Carlstrom for that murder on May 11. By that time, Cook and Carlstrom had already fled Arkansas in Cook’s vehicle and traveled to Mississippi, where they stayed with acquaintances from May 7 through May 15.

An agent testified during the hearing that Cook admitted Carlstrom had told her on multiple occasions that he would not go back to prison, and that he would have a shootout with the cops if he and Cook were ever stopped by law enforcement. Following the incident on May 15, officers found a stolen Glock, 9mm handgun. Two firearms that had been stolen from Sartorelli’s house were also recovered at the residence where Carlstrom and Cook had been staying in the previous week in Mississippi.

After approximately three hours of testimony during Wednesday’s hearing, U.S. Magistrate Judge Roy Percy found that Cook presented a risk of flight and ordered that she be held in jail without a bond pending trial. The case is being prosecuted by Assistant U.S. Attorneys Clyde McGee and Clay Dabbs.