Kiffin: Coronavirus “magnified” challenges of being a first-year coach 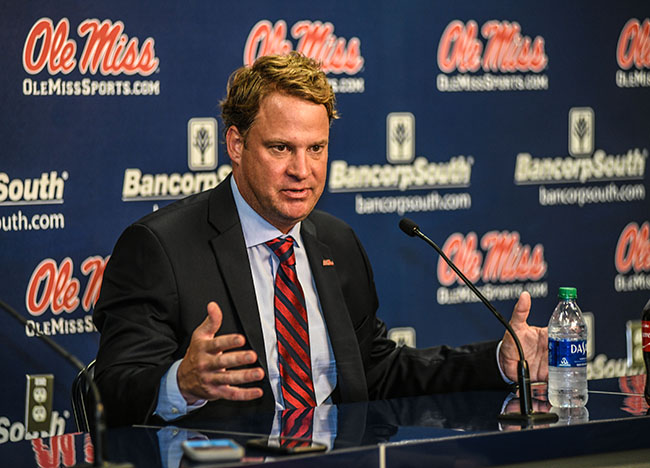 Lane Kiffin has been laying low, along with others who are quarantining and self-isolating from the threat of coronavirus, leaving few opportunities to hear from the Ole Miss head football coach.

In a normal year, Kiffin would have already had his spring practices, spring game and shifting into summer workouts as he enters his first season in Oxford this fall.

This is not a normal year, with campus shutdown and all athletic activities on hold since mid-March. Outside of a couple interviews with national outlets, Kiffin has been relatively quiet.

That changed on Wednesday, when Kiffin participated in a segment called “Under the Visor” which aired on the Ole Miss Athletics YouTube page. Kiffin answered fan questions on topics ranging from a recent ESPN documentary about the 1990 Chicago Bulls dynasty to Bon Jovi.

In the midst of answering the unique questions during the almost 14-minute video, Kiffin touched on the difficulties of not seeing his football team on the field in any fashion since he was hired in December. Without spring practices and the unknown of when football activities will resume again, Kiffin has had to deal with obstacles most first-year coaches have not had to before.

“There’s a lot of (challenges), but this is magnified with the Coronavirus to have no spring ball with your kids,” Kiffin said. “It’s very difficult and challenging. But in general, it’s very challenging to build a roster and staff. Staffs are so big nowadays. It used to just be your coaches and a couple (grad assistants). Now, it’s up to 10 coaches, four GAs and we’ve got all kinds of outfield coaches.”

The pandemic has also affected Kiffin’s ability to begin working on his first full recruiting class in 2021. The NCAA extending the Division I recruiting dead period through June 30, making it nearly impossible for coaches to begin molding the early stages of what their class could look like come National Signing Day in December.

With high school campuses closing down roughly the same time as college campuses did across the country, not getting to see prospects play games or practice has collegiate coaches in a level playing field, but a first-year coach such as Kiffin is put even further behind.

“Obviously there’s no in-person recruiting, so that’s been very challenging. Especially for a first-year staff, it’s not ideal timing,” Kiffin said. “Kids are making decisions right now. They normally would’ve already been on our campus. (We’ve done) a lot of Zooms. A lot of calls. Really just trying to maximize the situation we’re in.”

Kiffin also discussed the home and home series with Southern California that was announced on Monday. Getting to play games of that caliber, including games against Baylor this year and Louisville next year, gives the team added incentive in the preseason, according to Kiffin.

“They’re great games. National recognition,” Kiffin said of playing USC. “Two of the greatest game day places in all of college football. To me, the Baylor one and Louisville next year, when it’s your first one, it gives kids something to look forward to and work all offseason a little bit harder.”

The full question and answer session can be viewed below.