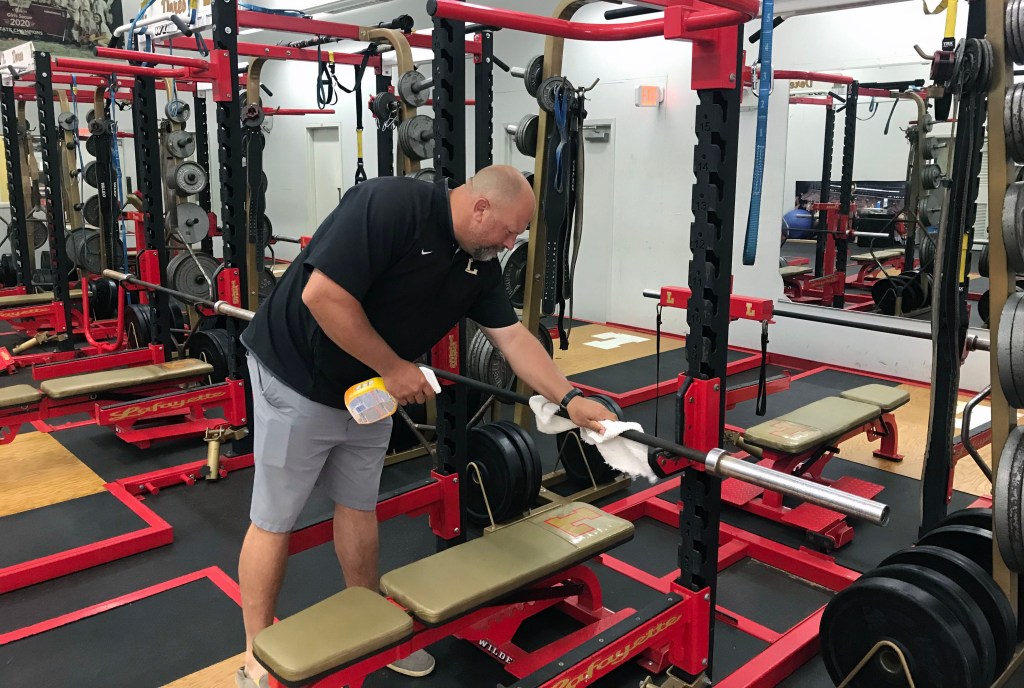 Lafayette High School head football coach Micheal Fair wipes down the bench press inside the baseball fieldhouse on Thursday, May 28, 2020. Fair and other coaches around Mississippi are beginning preparations for the return of their athletes, beginning June 1. (Jake Thompson/Oxford Eagle)

Sitting inside the field house behind William L. Buford Stadium, the two coaches were unboxing workout t-shirts and shorts at 7 a.m. for their players to wear when they return next week.

After nearly two months of all high school sports and activities being suspended due to the COVID-19 pandemic, coaches across the Mississippi are getting ready for players to return to athletic facilities, beginning June 1.

The Mississippi High School Activities Association’s executive committee voted on May 21 to reopen facilities next month for practices and workouts only.

“I think it’s going to come down to this is whatever we make it,” Fair said. “If we get these kids together and we’re upset about what we can’t do, then that’s going to really put a damper on the opportunity we have to see our kids for the first time in over two months.”

June 2020 will not be like any previous year, where the month would be filled with teams playing summer games in nearly all sports. Any competitions outside of inter-squad scrimmages are prohibited.

There are plenty of rules, regulations and guidelines from the federal level all the way to the municipal level that all teams and coaches must follow when the calendar flips to June 1.

An acclimation period of two weeks is the first step teams must take in getting their players back into game shape. With spring sports canceled in mid-March, football players were not able to participate in their usual spring drills and jamborees.

That is the challenge facing strength and conditioning coaches across the state, including Oxford’s Jason Wilfawn.

“For the first week, we’re only going three days and everybody’s going to be outside, even our indoor court sports. We’re all going to be outside,” Wilfawn said. “The indoors thing right now is just too hard to navigate with what we’re dealing with as far as athletes.”

Oxford has formulated an “extensive” plan for when players return, according to Wilfawn. Oxford football coach and assistant activities director Chris Cutcliffe and softball coach Tabitha Beard are working together to make sure the players’ temperatures are taken every day, as well as making sure surveys are filled out, among other rules. For example, each player must bring their own water bottle.

The teams will be spread out across Oxford’s football field, practice field, softball field and baseball field on the Oxford Middle School campus in groups of 20, the maximum number allowed for outdoor gatherings of school sports teams. Lafayette is utilizing the same strategy of spreading out their teams and players across the fields available to them at the LHS campus.

Wilfawn laid out his plan for the first week of the acclimation period to the coaches during a meeting on Wednesday. The coaches will be running the workout plan next week with their respective groups instead of Wilfawn.

“It’s a very basic, very remedial plan,” Wilfawn said. “I’ve spoken with friends from other states that have opened up before us, so they’re a little further ahead with the whole process than we are. They’ve all said the same thing: ‘Be prepared for the kids to be in bad, bad shape. Even some kids you wouldn’t expect.’ We’re taking a very remedial approach with all the kids.”

A gradual process of easing the players back into shape and workouts is also being taken by Lafayette. Fair said he expects his players to come back next week in different stages of shape, from those who have worked out on their own while home to those who may have taken the downtime to relax.

Once the two-week acclimation period is complete, the coaches will reassess and see what the next step needs to be that is allowable by the MHSAA’s Return to Activity guide released on May 21. The focus will eventually turn to the first sports scheduled to return in the fall: volleyball and football.

Water Valley is also taking a gradual return to activity. Head football coach and athletic director Brad Embry tweeted out the Blue Devils’ schedule for next week on Wednesday, noting high school football players will practice for two hours from 7 a.m. to 9 a.m. on Monday, Tuesday, Thursday and Friday.