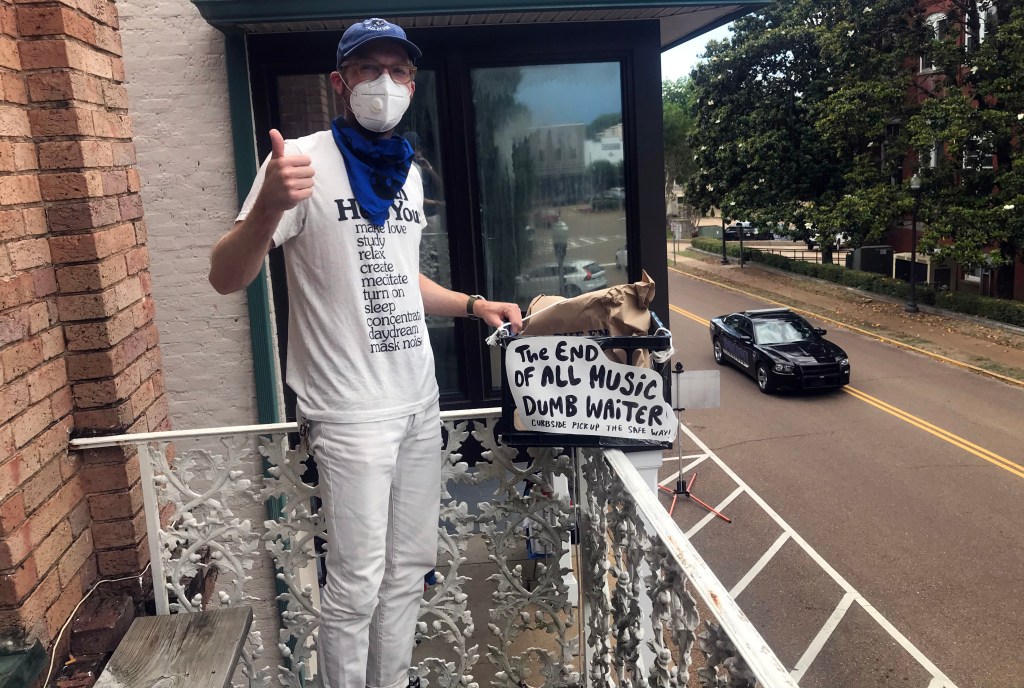 David Swider, owner of The End of All Music, stands with their makeshift dumbwaiter waiting to deliver an order to a customer on Thursday, May 28, 2020. The dumbwaiter was one of the ways Swider adapted his record store to the COVID-19 pandemic. (Jake Thompson/Oxford Eagle)

David Swider was already planning to further enhance his store’s online presence, but then, a pandemic made it necessary.

The End of All Music, located on the Downtown Square, was forced to adapt like many other small businesses once the COVID-19 pandemic made its way to Lafayette County. Businesses closed their doors, and in some cases their operations altogether, until the crisis passed and it was safe enough to reopen.

Knowing in-store shopping was obsolete for the immediate future, Swider took the situation as an opportunity to begin expanding his store’s digital footprint in online shopping.

“Initially, I wasn’t freaking out that much, because we were already kind of geared towards being able to sell stuff online,” Swider said. “So, I was just kind of like, ‘Well, now we’ll just move everything online.’ We were kind of moving that way already, not to become an online-only shop, but to just have a bigger online presence. Every year we made more and more money by selling online, and we’ve added more stock and stuff to it.”

There was a learning curve for Swider, who essentially turned his brick-and-mortar shop into a full-blown fulfillment center almost overnight. The two main rooms that hold records became mini warehouses where orders were filled and shipped out.

The shift was a change that Swider said he had to get accustomed to, as he was more of a fan of getting customers into his shop to provide them the experience of finding that one record they’ve been looking for in person.

“I’m such a stickler for having a nice and neat store and it being curated and aesthetically pleasing and all that,” Swider said. “All that goes out the window, except for like social media stuff. For a business owner, I don’t know if fun is the right word, but it was exciting. You’re getting to do a lot of different stuff then what your normal day-to-day is like. Certainly plenty of stress goes along with it but the customers seem to go right along with us.”

The store’s expanded presence on social media helped expand their customer base, according to Swider.

Once their new means of business was established and the store closed, figuring out how to handle curbside service was the next item for Swider.

Having a second-story store where getting to customers in their car is not as easy as most of the other stores and restaurants on the Square, some ingenuity and creativity was needed.

An idea from a part-time employee at the store formulated the now-infamous dumbwaiter Swider uses to send orders down from the End of All Music balcony to waiting customers down below, and provided the store with some unexpected publicity. What started out as promotional videos for the store turned into one of their most successful business ventures.

“(The employee said) we ought to make like a treehouse, where you can lower down a bucket and people can get records that way,” Swider said. “We made it for the video and then we were like, ‘Well, this is actually kind of genius.’ So, obviously it was like a happy accident and we started calling it a dumbwaiter. … A really genius marketing ploy out of us totally goofing around, which is usually when the best ideas come anyway.”

The dumbwaiter received national attention by finding its way onto a CNN broadcast earlier this month. Once businesses can resume normalcy and Swider feels comfortable getting to as close to business as usual as possible, he said he intends to still keep the dumbwaiter, as it helps provide a service to customers who may not be able to use the stairs to get to his store.

Despite the record shop seemingly finding ways to remain successful at a period where small businesses are struggling to do so, Swider said the store has also experienced tough periods.

With the loss of April’s annual Record Store Day and the Double Decker Arts Festival being postponed to August, the store took a massive hit. The two-day arts festival is one of the store’s biggest weekends and takes full advantage of all the foot traffic on the Square.

“April’s our best month of the year over December, which is pretty wild,” Swider said. “To take that away (is significant), but I guess the flip side of the coin is we didn’t have to spend that much money those months either because we weren’t getting ready for these big events. Especially like Record Store Day, where we’re bringing in 500 new records for that one day. So, we were able to save a little money. We’re hoping by the end of the year that it all evens out; that we get those sales in the fall and we have a good Christmas.”

Record Store Day is now taking place over three months, beginning in August. Records that were intended to be sold at independent record stores across the country on one Saturday in April will now be spread across three Saturdays in August, September and October.

With the hope of Record Store Day still happening in 2020, a lot can change between now and August. Swider is now taking appointments for in-store shopping by signing up through the End of All Music website, and there is a sense of normal business returning. Much remains to be seen with 2020 just now getting to its halfway point, but Swider said he is finding ways to keep the records spinning.