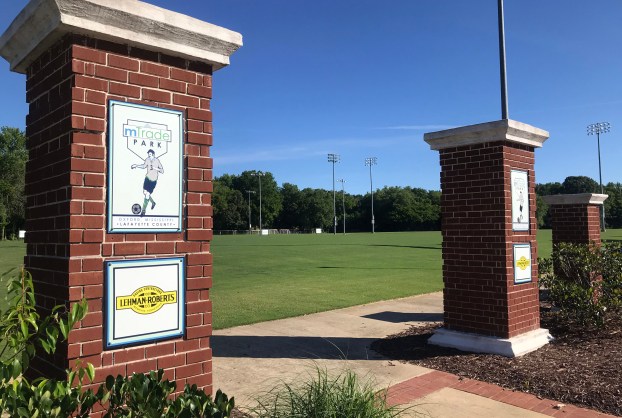 mTrade Park is hosting its first tournament this weekend after being allowed to reopen this week after closing in March due to the COVID-19 pandemic. The North MS USSSA Global State Championship will take place June 5-7, featuring at least 119 teams. (Jake Thompson/Oxford Eagle)

Oxford’s outdoor complex will host its first tournament this weekend after being closed for nearly two months due to the COVID-19 pandemic. The North Mississippi USSSA Global State Championships will take place from June 5 through 7, marking the first tournament held at mTrade since March 13.

The complex had to cancel 12 events due state and local guidelines regarding social distancing. Some of the tournaments mTrade Park lost out on in March, April and May have been added on the back end of the summer schedule and will take place later this month or in July.

During the Board of Aldermen’s special meeting on Sunday, mTrade Park was discussed, along with Reeves’ guidelines for parks that allow team sports included in his executive order.

“mTrade Park is a critical part of our youth activities and tourism in our community, but we want to do that in a safe way,” Oxford Mayor Robyn Tannehill said.

While the outdoor gatherings guidelines state no more than 50 people are allowed in one place, the executive order allows that number to be doubled for outdoor sports complexes and organized team activities. The rule allows for 50 people per team, including players and coaches as well as the umpires.

Brad Freeman, executive director of mTrade Park, was also in attendance at Sunday’s meeting and provided some of the guidelines and protocols that his staff will be implement along with the guidelines found in the executive order.

According to Freeman, there are 122 teams registered for this weekend’s tournament. To ensure the complete safety for all the players and the fans in attendance, adhering to the social distancing guidelines will be key, according to Freeman.

Some of the teams who will be participating in this weekend’s tournament have already played in tournaments in other states, including Tennessee, where sports complexes have been reopened for a couple of weeks.

Teams will be required to clean out their respective dugouts after each game, and then mTrade Park staff will come behind them and spray down the dugout before the next team can enter.

Freeman acknowledged there might be some trial-and-error with this first tournament to figure out the best way protocols can be followed. Six of the nine people staffed at mTrade Park were furloughed, creating some difficulties in planning out the management of tournaments once they resumed.

“It’s kind of like reopening the park all over again,” Freeman said. “When we opened the park that first time, we were like, ‘Man, that didn’t work,’ or ‘That worked good.’ So, we’re going to dial that in, but parents are now kind of used to (the waiting). A lot of this stuff has already been practiced at other facilities the past couple weeks.”

There will be two entrances at the park with one for teams to enter and one for fans to use to avoid a “bottleneck” situation, according to Freeman.

One thing mTrade Park is doing to avoid as much contact as possible when it comes to cash is charging each team a spectator fee. The fee is will be around $250 to $275, according to Freeman, who told the Board on Sunday he did not have a set fee yet.

Reeves’ order does not allow concession stands to be opened at sports complexes, and bleachers will not be available for fans, who will have to bring their own chairs. Fans are also asked not to enter the complex earlier than five minutes before game time and to stay in their vehicles to avoid mass gatherings at the entrances of the fields.

“We’re ready,” Freeman said. “It’s going to be up to the participants to kind of follow these guidelines. We’re putting them out there, but having a player entrance and exit and a fan entrance and exit is going to help circumvent the main entrance getting bottle-necked with people. It’s always been real free-flowing anyway but we feel this will help.”

On Monday, mTrade Park posted their Return to Play Guidelines on their social media accounts, which can be viewed below.

Protesters have flooded the streets of major cities across the country in response to the death of George Floyd while... read more