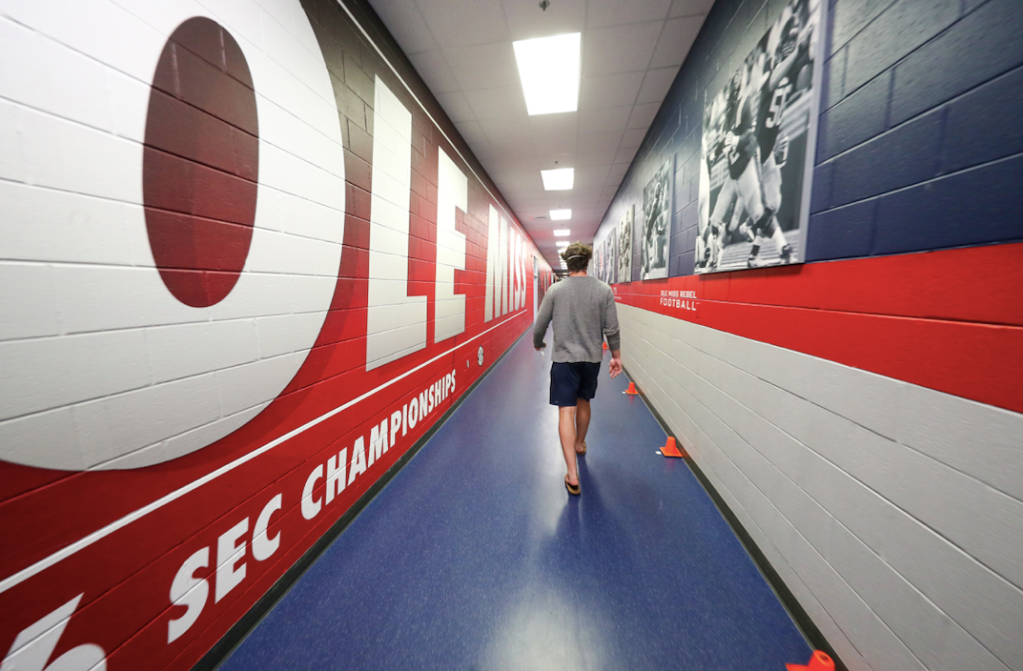 Ole Miss football student-athletes were screened and tested for COVID-19 upon their return to The Manning Center on the Ole Miss campus on June 1st, 2020. (Joshua McCoy/Ole Miss Athletics)

Since Ole Miss senior associate athletic director for health and sports performance Shannon Singletary and the rest of the Ole Miss planning subcommittee began meeting in late February, they expected a day like Wednesday could happen.

Ole Miss announced that an employee and a student had tested positive for COVID-19, which was later confirmed to the EAGLE to be a student-athlete and a staff member in the athletics department.

The first wave of football players began returning back to campus on Monday to begin their COVID-19 tests and screenings in preparation for voluntary workouts to begin on June 8. Members of the soccer team were also tested earlier this week.

“This is something that we expected,” Singletary told the EAGLE. “That’s why we worked so hard to have this in place. … The protocols are in place. We did expect some positives.”

The athlete who tested positive will now begin their 14-day quarantine period in an isolation unit that was already set up by Ole Miss and fully furnished with food and proper furniture for them to live comfortably. The staff member who tested positive is in isolation in their home in Oxford, and both are following the isolation protocols and directions that Singletary’s staff is providing.

The Mississippi State Department of Health, along with Singletary’s staff, is now conducting contact tracing to determine who else may need to isolate and quarantine for a two-week period.

Prior to athletes returning to Oxford this week, a pre-screening was done over the phone 72 hours before they arrived. Singletary said some athletes in different sports did not pass the screening and were told to stay home. One of those has since tested positive and is quarantining at home, according to Singletary.

Around 70 players showed up to campus on Monday for their physicals and COVID-19 testing, as well as antibody testing. The players also began their educational programs on COVID-19 and walked around the athletic facilities to see all the different changes and accommodations made to comply with the 40-page manual Singletary and his staff are following.

Physicals were administered on Monday and Tuesday, with the next wave of athletes scheduled to arrive on June 5, 8, 15 and 23. Most of the spring sport athletes will return to campus for the final two physical days. The positive test results have currently not altered or halted the remaining schedule for June, according to Singletary.

“The spring sports, some people are not coming back to do voluntary workouts. They’re staying at home because they’re maybe playing in a league or something like that,” Singletary said. “There’s a pretty good sample in each sport that’s going to be here at some point in the summer, because a lot of the leagues have been canceled and a lot of tournaments for tennis players and other sports have been canceled. So, they’re going to come up here and train instead of travel the country.”

The University of Mississippi Medical Center provided a staff of doctors and nurses to help administer COVID-19 and antibody testing to the athletes. The tests are then sent down to Jackson, where there is around a 24- to 48-hour turnaround period to get the results back, according to Singletary.