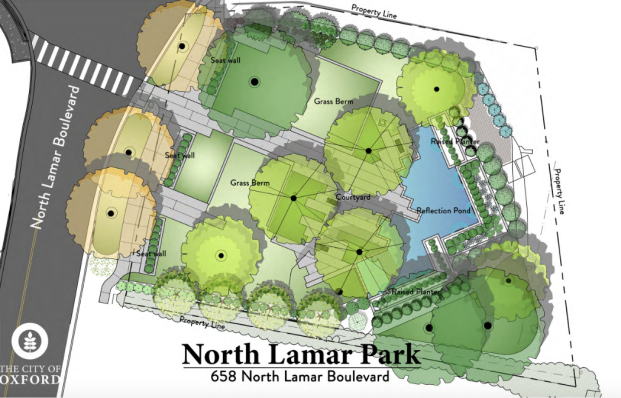 After going back to the drawing board earlier this year, the North Lamar pocket park is close beginning construction.

The Oxford Board of Aldermen voted to approve bids for the project during their regular meeting on June 2. The new bids were opened on May 22 and had to be resubmitted after bids for the original designs came in over budget. The bids for the initial project were between $930,000 and $2 million.

The lowest bid for the for the new park design came from A.S. Fornea Construction, an Oxford-based general contracting company with a base bid of $396,400 and $13,900 for low-voltage lighting.

An anonymous donor is fully funding the project, according to Oxford chief operating officer Bart Robinson. The City, which is currently dealing with large potential losses in projected revenue, will not be paying for construction of the park, which will be at the corner of North Lamar Boulevard and Price Street.

“I think it’s important for the public to know that, while we start on a project while we are in dire times, as far as our finances go, that this is all from a private donation,” Mayor Robyn Tannehill said during the meeting. “No city funds and city taxpayer money is being utilized on this project. It’s just a very generous donation from one of our citizens.”

In April, the Oxford Historic Preservation Commission approved new, simplified plans for the park, which will include concrete pathways, tree planters and small water features, such as a reflection pond. The approximately 12-inch-deep reflection pond is replacing a concrete fountain that was in the original plan.

The Commission approved the plans and agreed to send a request to the Board of Aldermen to have public art on display at the park, along with a commemorative plaque honoring the former Fire Station No. 1, which previously resided at the location. A potential statue for the late author Larry Brown, who was also a firefighter, was another potential request for the park from the Commission.

Following a ruling by the Hinds County Chancery Court, the Mississippi State Department of Health released a list of long-term... read more