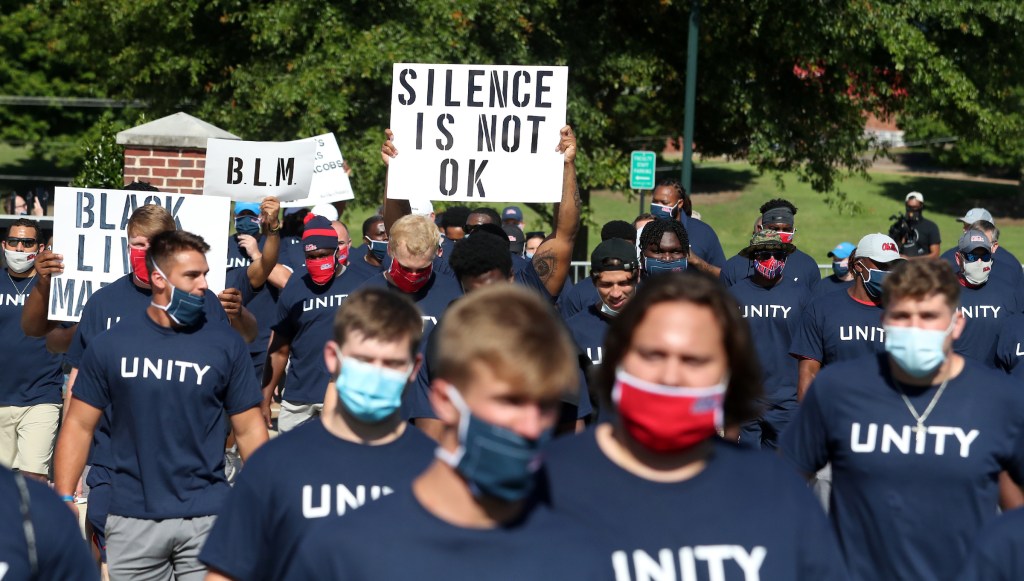 Ole Miss student-athletes, coaches and staff took part in a "Unity" march on Saturday, June 6, 2020 around the Ole Miss athletic complexes. The march was private and in response to the death of George Floyd, a black man, while in police custody last month. (Joshua McCoy/Ole Miss Athletics)

The Ole Miss athletics department came together on Saturday morning to spread a message of unity.

In response to weeks-long protests across the country, and here in Oxford, over the death of George Floyd while in the custody of the Minneapolis police last month and racial injustices, the Ole Miss student-athletes, coaches and staff members held a Unity March on campus.

The march, which was private due to COVID-19 and social distancing guidelines, started at the Ole Miss Track & Field complex, where athletics director Keith Carter, women’s basketball coach Yolett McPhee-McCuin and Oxford Mayor Robyn Tannehill spoke to the athletes in attendance.

Spoke today at our Unity Walk! If you do choose to read this, please do it with an open heart and mind! ❤️ *this is what I said to everyone there* pic.twitter.com/6lnhpJeJhN

With signs that read “Silence Is Not OK” and “Black Lives Matter,” athletes marched from the track & field complex to the football practice field wearing shirts that said “Unity” across the chest. Football player Ryder Anderson led the march while using a megaphone and leading chants of “Black Lives Matter.”

Anderson also spoke once the they arrived to the practice field.

Saturday’s march was the third protest or rally to be held in Oxford in the last week. On May 30, a peaceful protest called “I Still Can’t Breathe” took place on the Downtown Square. On Thursday, a peaceful march from the Square to the Gertrude C. Ford Center was held by the same organizers.