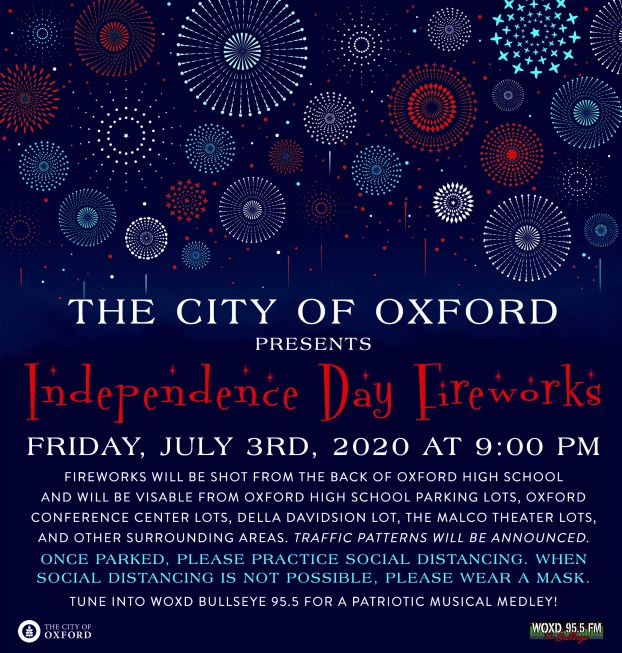 City of Oxford to host Independence Day Fireworks on July 3

The City of Oxford has announced that they will be shooting fireworks on Friday, July 3 at 9 p.m. from the back parking lot of Oxford High School.

The fireworks will be visible from Oxford High School’s parking lots, the Oxford Conference Center, Della Davidson Elementary, the Malco Oxford Commons parking lot and other surrounding areas. Traffic patterns will be announced prior to the event.

Local radio station WOXD Bullseye 95.5 will be playing patriotic music in synchronization with the show. The City of Oxford advises that, once attendees have parked, to please practice social distancing and to wear a face mask if social distancing is not possible.

The City of Oxford announced their Independence Day Fireworks show on Twitter Wednesday, June 10 with a flyer detailing the event. The Oxford-Lafayette County Chamber of Commerce announced two weeks previously that the annual Fourth of July events were canceled.

The decision to cancel the events on the Fourth of July is due to the University of Mississippi canceling their events on campus, Tannehill said. In years past, the Chamber of Commerce has partnered with local businesses including Olin-Winchester to present fireworks on the UM campus at Oxford-University Stadium.

At the Oxford School District Board of Trustees meeting in May, Dr. Harry Rayburn was named this year’s Oxford School... read more