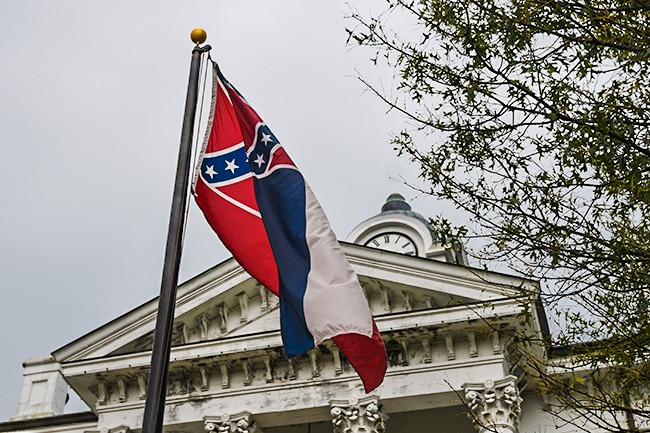 University of Mississippi Dean of Students Emeritus Sparky Reardon is urging alumni to continue the push to change the Mississippi state flag.

Reardon, along with two former leaders at Mississippi State University and the University of Southern Mississippi, co-wrote a letter to former students urging them to advocate for change in Mississippi, starting with the state flag, which features imagery of the confederate battle flag.

Mississippi is only state in the country that features the symbol on its state flag.

According to Reardon, the decision to pen the letter was in the works long before this week and began after he posted a frame around his Facebook profile picture. Paul contacted Reardon and planted the seeds of what it might be like if they could rally former students of their respective universities around the cause.

“We got together and just realized that all of us feel the same about Mississippi and our state and also were willing to write the letter,” Reardon said. “I’m really honored to work with those two guys.”

The letter, which can be read in full below, was posted on Tuesday on several social media platforms. It asked for help from their former students in contacting state and local officials and state legislators in regards to changing the flag.

Reports came out earlier this week that Mississippi legislators were pushing for a vote to begin the process of changing the flag as early as this week, with the blessing of Mississippi House Speaker Phillip Gunn.

“It’s further along than it has been,” Reardon said. “I just don’t know that we hold our elected officials accountable.”

In the wake of the death of George Floyd, a black man who died while in police custody in Minneapolis, and other deaths of unarmed black people at the hands of law enforcement officers over the past several weeks, protests across the country began. Oxford held two peaceful protests last week, and the University of Mississippi athletes held a private Unity march on Saturday.

The protest in Jackson over the weekend filled the downtown streets and called for the removal of the current state flag, among other topics.

The issue of changing the state flag was part of a special election in April of 2001, known as the Mississippi Flag Referendum. Proposition A, which was in favor of keeping the flag as it was, won with over 64 percent of the vote.

The idea of replacing the current state flag has been long-discussed, but with the current climate of the country, the discussion is at its most critical point, Reardon said.

“I think the thing that we got to look at is, it’s easy to jump in line, fall on that knee and say ‘We’re sorry, we need to do better,'” Reardon said. “Until we have a lasting change of heart, individually and collectively, and start doing what we can within our spheres of influence where we change ourselves and change others, we’ll be back here. It’s got to be a concerted, focused effort for each individual and to not worry about critics.”

Read the letter in full below: