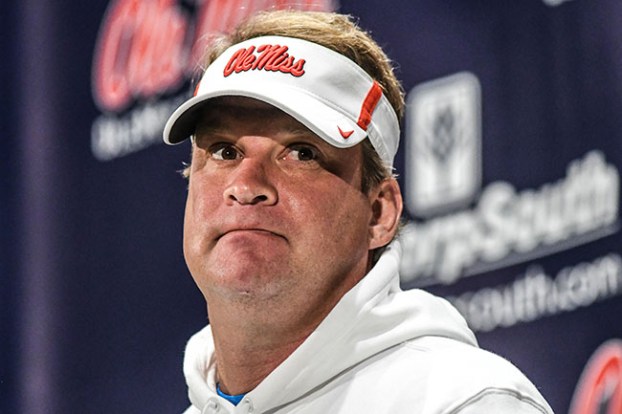 Ole Miss head coach Lane Kiffin discussed the challenges of missing out on the spring to get to know his players and building relationships heading into his first season. (Bruce Newman, Oxford Eagle)

The COVID-19 pandemic is not ideal for any college football program, but for Ole Miss head coach Lane Kiffin and his staff, the challenges have been amplified.

A first-year staff that is hired and finalized in December and January, during a normal year, would have the spring to meet with their players, begin to install a new system during practices and see where things stand with a spring scrimmage.

None of that happened this year due to the COVID-19 pandemic, but what also did not happen was the opportunity for Kiffin to get to know his players off the field.

Building relationships between a coach and player is a crucial part of team chemistry. Kiffin said he was made aware of how much catching up he and his coaching staff have to do now that players are returning to campus after being away for three months.

“(I) just brought him in here for an hour and just kind of went over some things for him,” Kiffin said during a Zoom meeting with local media on Wednesday. “This situation is not ideal for a first-year staff, probably creating more issues than I thought. Spring ball, you really get to know your players. You’re on the field with them. You’re interacting with them and putting faces with names. They get to know you and how you can help them on the field. We missed all of that. Unfortunately, when we were in our meetings last Monday talking about all of the stuff going on nationally and just listening to the kids, I just realized how little I know our kids, especially as a head coach. Position coaches have had some meetings and gotten to know them, and we’re behind obviously football-wise, but we’re really behind relationship-wise.”

Kiffin had some meetings with players before the Southeastern Conference suspended all spring activities and the University of Mississippi closed down campus in March. Since then, communication has been minimal outside of Zoom calls, and Kiffin said he is not able to have much interaction with the players during voluntary workouts with the strength and conditioning staff.

The morning of the Unity walk, Kiffin said Moore sent him a text about how “excited he was” to get back to campus, and how the players also missed out on building relationships with him. The two spoke about that, as well as what the Unity walk meant to the team after its conclusion.

“It was good to talk to him,” Kiffin said. “On the theme of listening, which has really been a theme here with all of the things going on, and this was just another example of that. One of the positive things that has come out of all of this, in all areas and we’re seeing it everywhere — even with Elijah sending the head coach that text. I really feel like it’s allowing people — in our situation, players — but all around the country, it’s allowing people who feel like, ‘Maybe I shouldn’t say something,’ and not just about these topics, just about my feelings in general, to say, ‘Hey, it’s okay to do that.’ I thought that was kind of part of that, where maybe he wouldn’t have sent that text normally.”

Kiffin did say he didn’t think his African-American players were “satisfied” yet following the Unity walk, and they are waiting to see if the theme of commitment to change will stick around on campus in weeks and months to follow

“This is like opening day for baseball; 162 games and this is the first game,” Kiffin said. “They’re going to want to see change. They’re going to wait and see, was this just an act or something that was done for publicity or to check the box? Or are we going to really follow through on Keith Carter’s lead of what he talked about with this being the beginning?”