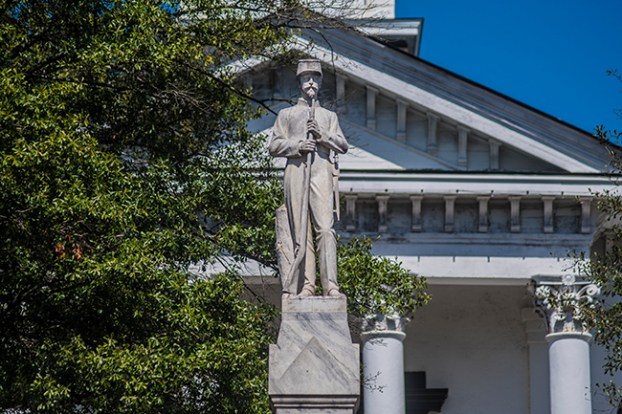 Oxford Board of Alderment sent a letter to the Board of Supervisors regarding questions over ownership of the property the Confederate statue sits on. (Bruce Newman/Oxford Eagle)

Mayor Tannehill: Confederate statue “needs to be removed to a more appropriate place”

The topic of removing the confederate statue from in front of the Lafayette County Courthouse has been at the forefront of discussion, due to the events of recent weeks.

Despite the statue being on county property and not under the jurisdiction of Tannehill or the Oxford Board of Aldermen, the Mayor issued a statement on Friday morning joining those who wish for the statue to be relocated.

Tannehill also addressed her opinion on the Mississippi state flag in her comments.

“During my years of serving as an Alderman and now as Mayor of the City of Oxford, I have received numerous inquiries about relocating the Confederate statue from the lawn of the Lafayette County Courthouse,” Tannehill’s statement read. “As the Mayor of Oxford, I have no authority over county property  — nor does the Oxford Board of Aldermen. It has long been my view that the statue needs to be moved to a more appropriate place. Just like the current Mississippi state flag does not represent our diverse state or our desire to make every resident and visitor feel welcome, the Confederate statue does not represent our diverse community and certainly does not make every resident feel welcome. I echo Chancellor Glenn Boyce’s sentiment that we should not allow our past to prevent the cultivation of a better present and future.”

The University of Mississippi is in the process of relocating the Confederate statue from the Lyceum Circle to the Confederate cemetery located behind C.M. “Tad” Smith Coliseum on campus. The Institute of Higher Learning’s Board of Trustees tabled the vote to approve the move until the University had supplied them more information before taking a vote.

The University provided the EAGLE with a statement on Friday regarding an update on their process.

“The university continues to work diligently toward the progress of the report requested by IHL. We have no additional updates to share at this time.”

Mississippi Code 1972 Annotated 55-15-81 dictates that “none of the following items, structures, or areas may be relocated removed, disturbed, altered, renamed or rededicated: Any Revolutionary War, War of 1812, Mexican-American War, War Between States, Spanish-American War, World War I, World War II, Korean War, Vietnam War, Persian Gulf War, War in Iraq or Native American War’s statues, monuments, memorials or nameplates (plaques), which any statues, monuments, memorials, nameplates (plaques), schools, streets, bridges, parks preserves, reserves or other public items, structures or areas of the state or any of its political subdivisions, such as, local, municipal or county owned public areas, which have been dedicated in memory of, or named for, any historical military figure, historical military event, military organization or military unit.”

Earlier this year, Mississippi senator Joseph “Mike” Seymour presented a bill that would prohibit the relocation of historical monuments. If it had been approved, the amendment would “delete the authority of public governing entities to move historical monuments and memorial.” Senate Bill 2068, as it was known, did not pass.

An Oxford restaurant was forced to temporarily close its doors due to employees testing positive for COVID-19. Jinsei Sushi announced... read more