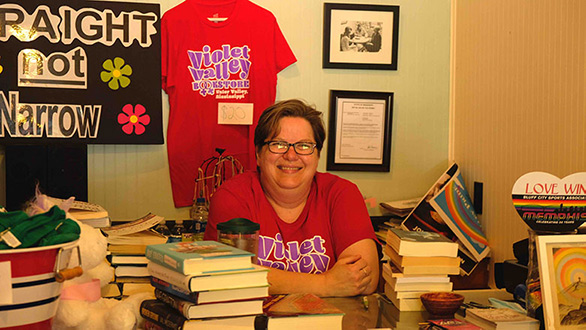 Every book nerd dreams of opening a book store, and for Jaime Harker, that dream became reality in December 2017 when she and her partner opened Violet Valley Bookstore in Water Valley.

The bookstore was recently featured on the national stage as part of PEOPLE Magazine’s Pride Issue. On page 61 of the June 22 issue of the magazine, Harker is pictured outside the store next to a testimony about what it’s like to be the only LGBTQ bookstore in Mississippi.

Violet Valley Bookstore makes feminist, queer and multicultural books available to the Water Valley community, the state of Mississippi and the South. It supplies both new and used books at an affordable price so that everyone, no matter their income, can afford literature.

“It was just an opportunity that came to the floor,” Harker, a professor of English and director of the Sarah Isom Center for Women and Gender Studies at the University of Mississippi, said. “Like anyone who loves books, I always thought it would be great to own a bookstore.”

When Harker first saw the building, it had been an empty art gallery for local artisans Coulter Fussell and Megan Patton.

“When I first saw the building, I thought, ‘That could be a really cool space for a book store,’” Harker said. “I just kind of mentioned it [to my partner] and she was like, ‘Okay. Let’s do it. Let’s start. Early November.’ I was like, ‘Wait, wait, wait – I was just talking.’”

Harker, an out lesbian from San Diego, opened her bookstore in the midst of Mississippi’s “religious freedom” bill. She really wanted to do something for the LGBTQ community, especially LGBTQ youth.

“I really wanted to build a space that said, ‘We want you here,’” Harker said. “‘You’re welcome here,’ and ‘We want this to be a space for you.’”

Harker said it’s been great fun for her to have a LGBTQ bookstore in the conservative South. While they are only open on Saturdays at the moment, she said she still gets people driving hours to come see her.

“They come in from Jackson,” Harker said. “Some come from Memphis. They come visit when they’re traveling around and they get really excited, especially people who grew up here who never thought they’d see anything like it here.”

When she first started her kickstarter campaign for the bookstore, Harker said she received a mix of feedback from the community. A lot of people were excited to have the bookstore, while others were less than thrilled. Rumors began circulating around town about the queer feminist book.

“Rumors started bubbling on social media and they were all over the place,” Harker said.

Some other rumors included that the store was being funded by the democratic party and that they were going to sell pornography. Harker’s favorite rumor, though, was that there was a gang of lesbians from the neighboring town invading Water Valley and trying to take it over.

“I’ve been looking for a gang of lesbians my whole life,” Harker said. “Where are they? Show up.”

According to Harker, while many people talked about her bookstore in the beginning, she’s never had any damages done to the building, and that people have really gotten used to having the bookstore in town.

“People come here and bring their kids here to shop,” Harker said. “For a lot of people, it became their routine to come by and shop. A lot of people just weren’t use to seeing a rainbow flag all the time. I think it’s forced a conversation that  I think has been good for everyone. To think about what it means to have a ‘community.’”