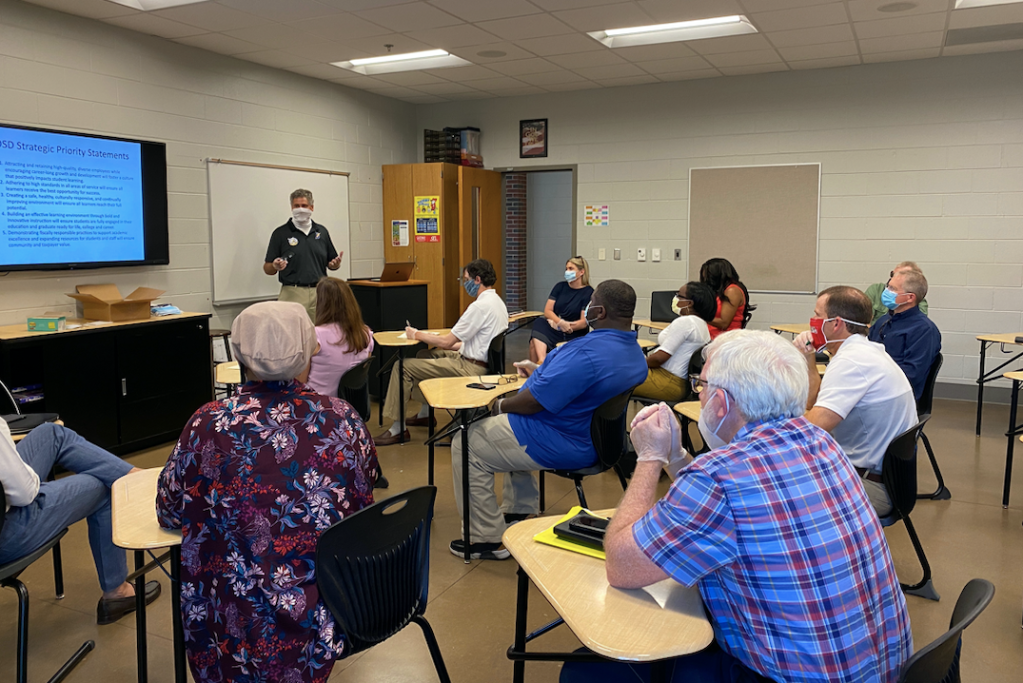 Oxford School District superintendent Brian Harvey talks with the committeed formed by the school district to help formulate a plan of returning to classrooms safely in August. Both Oxford and Lafayette County schools are planning resume normal operaton unless instructed not to. (Courtest of Oxford School District).

No matter how the rest of the summer goes, school is going to look different in August.

That is the consensus among both superintendents of the Oxford and Lafayette County School Districts, and nearly every superintendent across the state.

Working to figure out the best possible way to return students to classrooms safely has become the biggest task of every Mississippi school district.

“Our intent is, we will have schools open in August for everybody to go,” OSD superintendent Brian Harvey said. “That’s what we’re planning for unless someone tells us different.”

Oxford has formed a committee comprised of Harvey, medical professionals, school district officials, Oxford emergency management director Jimmy Allgood and a member of the Board of Aldermen. They are charged with looking at all of the local, state and federal guidelines that are in place with social distancing and combating the spread of COVID-19.

The committee met most recently last Friday and the members are hoping to come up with a plan for the OSD Board of Trustees to review and vote on by their June 29 meeting.

Lafayette school superintendent Dr. Adam Pugh is also working with a group of people within the school district and medical field to possibly present some form of a plan to their Board of Trustees during their July 6 meeting.

“The reason for the committee is really to decide under what conditions will schools reopen and close or transition to something else, should we need to,” Harvey said. “Although the city’s recovery plan does not specifically mention schools, we’re trying to follow the guidelines that they have in place for everybody else. Because if it’s safe for them, it’s safe for us. We’re part of that community and we want to be part of that.”

One major issue for both school districts is the current limit of people allowed to gather indoors in one space. The limit, set by Oxford’s recovery plan and Governor Tate Reeves’ executive orders, is currently no more than 20. Most of the class sizes exceed the 20-person limit by a good margin.

Mapping out how classrooms will be set up is also a challenge as Harvey noted; in some rooms, for example, they are only able to space desks out half of the recommended six feet. Another problem both school districts are facing is how they will handle students arriving every day and the protocol for checking each student for COVID-19 symptoms before entering the building.

“Are we going to check everybody’s temperature when they come in everyday? I don’t know how that’s possible,” Pugh said. “We would have them lined up, and by the time we finished doing that, it would probably be time to feed lunch and then get them on the buses. So, how are we going to do all this? I don’t have an answer on all that right now, but we’re going to figure it out.”

The Mississippi Department of Education sent out a packet of guidelines to school districts last week, in an effort to help them as they map their way back to in-person instruction this fall.

Most of what was in the guidelines are items both Oxford and Lafayette were already taking into consideration or have already begun to put in motion.

Requiring masks to be worn is still something both school districts are discussing; so far, a decision has not been made.

The State Board of Education (SBE) also provided flexibilities to school districts by suspending several policies for the 2020-21 school year to help deal with the impact of COVID-19.

State law requires schools to provide 180 days of instruction each school year. Local school districts are responsible for designing school schedules that best meet the needs of their communities. One of the SBE policy suspensions will allow districts flexibility with their scheduling, to comply with guidelines for managing COVID-19.

“Right now, what we’ve talked about is to do a traditional start,” Pugh said. “Obviously, we’re going to try and figure out how many of our people are just concerned or (say), ‘I’m not going to send my children back.’ Then, we’ll address those.”

Pugh said the district has ordered laptops to help get them closer to a one-t0-one ratio, but there are still issues with connection for many students who live in the county.

Ideas being discussed include pre-programming material onto the laptop for the students to work on without an internet connection and then when able to connect, submitting their materials. Putting WiFi on school buses is also being discussed, to allow students to connect on their way to and from school.

Both school districts have also received funding from the CARES Act. Oxford received $600,000, while Lafayette has so far received $366,272. However, according to both Harvey and Pugh, they are trying to figure out the requirements that come with the money and how they are allowed to spend it.

Board of Aldermen amend Phase II of the “Serving…