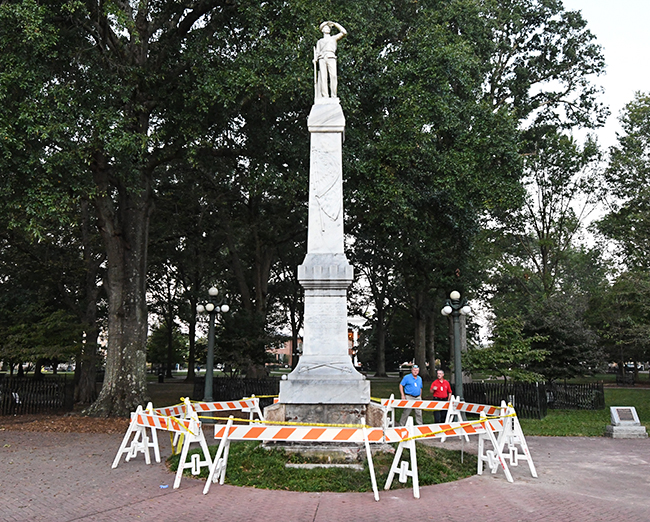 The base of the Confederate statue at Ole Miss, in Oxford, Miss. on Monday, September 18, 2017, was damaged when a truck crashed into it on Saturday night.

After years of searching, Dr. Anne Twitty found the full text of the speech dedicating the Confederate monument located on the University of Mississippi campus.

Scott was, at the time, a candidate for governor who often campaigned in his Confederate uniform. In his speech, Scott regularly defended the right of secession and argued that slavery was a “mere incident” to the Confederate soldiers and the nobility of white southern women.

It’s something Twitty, who has a Ph.D from Princeton and specializes in the study areas of Slavery and the Law and Antebellum America, said holds significance in understanding the relevance of Confederate monuments in modern society.

“In some ways, what I found is not particularly surprising, given what we knew about the motivation behind these statues already,” Twitty said. “But what I think I found was that smoking gun that dismantles these claims that these Confederate monuments are only monuments to the Confederate dead.”

The Twitter thread below includes excerpts from Scott’s speech:

On May 10, 1906, Charles Scott, a candidate for governor who often campaigned in his Confederate uniform, gave the speech dedicating a new Confederate monument at @OleMissRebels.

We’ve searched for the full text of this speech for years. On Friday night, I finally found it.

Twitty said that the argument that Confederate monuments have nothing to do with white supremacy and a broader Jim Crow era is invalidated by the discovery of Scott’s dedication speech text.

“We have looked for this speech for such a long time,” Twitty said. “Before I started looking for it, my colleague, John Neff, had been looking for it, and it just so happened that it was republished in a Vicksburg newspaper.”

The reason finding the speech was so important to Twitty and the late Neff is because a similar speech had been found by a graduate student at the University of North Carolina. The speech found at UNC is similar to the speech given by Charles Scott. Like UM, UNC too had a Confederate statue on campus that has since been torn down by students, because their board of governors refused to act on continued student protests.

“From a historian’s standpoint, we knew what the meaning of these monuments was,” Twitty said. “We knew that the fact that they appear all across the South at a moment when Jim Crow is really entering into its own, and taking on new significance when the black population of Southern states had been disfranchised and no longer has no opportunity to exert any political power (was significant).”

For Twitty, finding the speech is especially bittersweet because of the work of her colleague, Neff, who passed away in January of this year. At the time of his passing, Neff was serving as Director of The Center for Civil War Research at the University.

“I’ve been thinking about him in the last several days, and just how thrilled I think he would have been to have gotten his hands on this speech,” Twitty said.

The state Institutes of Higher Learning Board of Trustees is meeting on Thursday, June 18. After months of silence on the issue, the IHL Board is expected to discuss the Confederate monument, and possibly vote to approve its relocation to the Confederate Cemetery, located behind C.M. ‘Tad’ Smith Coliseum.