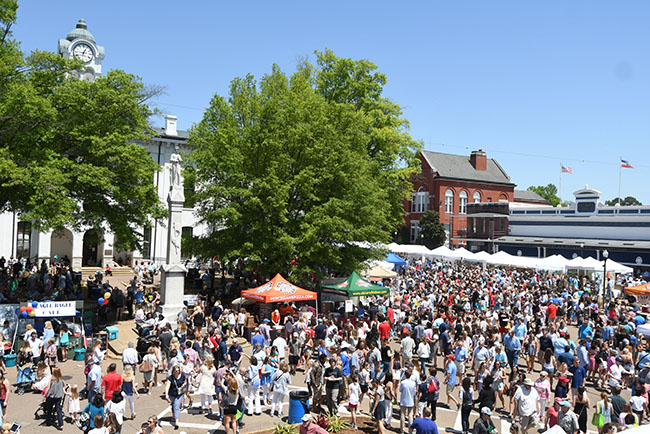 For the first time since 1993, the Double Decker Arts Festival will not take place on the Downtown Square this year.

The Oxford Tourism Council made the decision to postpone the 25th anniversary event to Spring 2021 in a special called meeting on Thursday. The council cited safety concerns and the current guidelines put in place by Governor Tate Reeves and the Centers for Disease Control as the reason for pushing it to next year.

It is the second time the festival has been postponed this year. Originally scheduled for April 24 and 25, the annual event was moved to August 14 and 15 in hopes of being able to still hold the event in 2020.

Current guidelines call for no more than 100 people at an outdoor gathering. With the festival’s new dates only eight weeks away and not knowing if those guidelines would increase to allow the usual average of 60,000 people who come to Oxford for the weekend event, the decision to postpone was made.

“With August right around the corner, we’re just not sure that (the guidelines are) going to change enough,” said Visit Oxford executive director Kinney Ferris during the meeting.

With the ongoing concerns over COVID-19, the recent rise in positive cases in Lafayette County this month and at least 160 positive cases among University of Mississippi students who are in Oxford, having a festival mid-August while more students continue to come back to Oxford for the start of fall semester was not a chance the Council wanted to take.

Double Decker Arts Festival coordinator Lee Ann Stubbs said they met with medical professionals and others prior to coming to the decision to not hold the event this year.

“At the direction of some of these professionals we felt that we could not safely and effectively follow all these guidelines with the environment and elements of the Double Decker Arts Festival,” Stubbs said. “This would have been the 25th anniversary of the festival, which was an exciting year for us. Rather than to not being able to properly celebrate the accomplishment and put it on at the magnitude we would normally want to, we want to simply take a pause and celebrate the 25th festival in Spring 2021.”

The Double Decker Spring Run is also postponed until the festival takes place next year. Race organizer Pam Swain noted that no other in-person races are taking place anywhere else in the country this year. Some races have turned into virtual events, but Swain noted making a transition to that format is not something they want to do.

“We’re not on an island alone down here,” Swain said. “They’re not happening. They’re all virtual if they’re going on at all and that’s not something we would really be interested in holding, because part of the beauty of our race is literally the beauty of our community. So, we crunched our numbers and decided the best thing for us is to postpone (the race) as well.”

No new date for the postponed festival was decided on during the meeting.