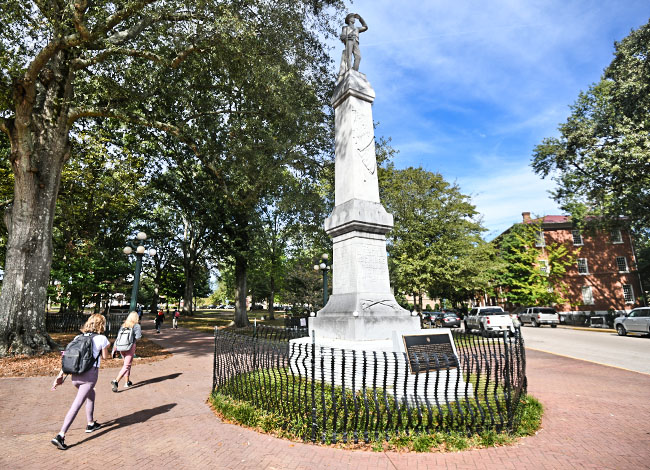 The IHL Board of Trustees voted on Thursday to approve the University of Mississippi's relocation plan for the Confederate statue currently located on the Lyceum Circle. The statue will be moved to the Confederate cemetery behind C.M. "Tad" Smith Coliseum. (Bruce Newman, Oxford Eagle)

The Confederate statue that stood in the shadow of the University of Mississippi Lyceum for the past 114 years will soon be moved.

The Mississippi Institutions of Higher Learning Board of Trustees approved the University’s relocation plan to move the statue to the Confederate cemetery behind C.M. “Tad” Smith Coliseum. The request was approved as part of the consent agenda during the Board’s monthly meeting in Jackson on Thursday.

In March 2019, the University announced its intention to relocate the statue, which has become controversial and created divisiveness since its construction in 1906. When the 2019-20 school year began, the University provided an update, where they unveiled their relocation plan for the statue.

The Mississippi Department of Archives and History (MDAH) approved the plan last December, paving the way for the IHL Board’s approval to be last puzzle piece needed to move the statue. In January, the Board pulled the item off the agenda when Trustee Thomas Duff made a motion to table the issue until the University could submit a full report on campus contextualization of related symbols.

“We appreciate the vote today by the State Institutions of Higher Learning Board of Trustees to approve the University’s proposal to relocate the monument on our campus,” Ole Miss Chancellor Glenn Boyce said in a statement. “The presence of the monument in the heart of our campus has been a subject of debate off and on for a long time. Now is the time for change as we strive to make a better present and future for everyone on our campus.”

This vote marks the culmination of years of research and discussion on how to address the monument. State law prohibits the relocation of any war memorial unless the proposed new location is more appropriate to display the monument. The approved plan allows the University to move the statue to the cemetery on campus. We are now prepared to complete this work and will do so as quickly as possible.”

The privately funded plan will cost over $1.1 million and will cover disassembling, transporting and reassembling the statue in its new location. Once placed in its new location in the cemetery, plans include a brick path surrounded by trees with lighting, as well as a new marker to recognize the men from Lafayette County who served in the Union Army as part of the United States Colored Troops during the Civil War.

New headstones will be placed in the cemetery to offer remembrance for those buried on the grounds, along with a stone path to the existing marker in the cemetery.

Reviewing the proposed cemetery improvements was something the Board felt was “prudent” in their due diligence in assessing the appropriateness of the relocation site, as required by law, according to a release sent out by the IHL following Thursday’s vote.

“The Board reviewed the detailed plans for the new site, considered events on college campuses across the South involving Confederate monuments, and listened to the University’s various constituency groups,” said IHL Board president Ford Dye. “The Board subsequently determined relocating the Confederate statue to be most appropriate for Ole Miss moving forward.”

The University stated they will begin the relocation process as soon as possible. The project is scheduled to take 90 consecutive days to complete once it begins.

To read Boyce’s full statement, view the detailed plans of the process and other information, visit chancellor.olemiss.edu.