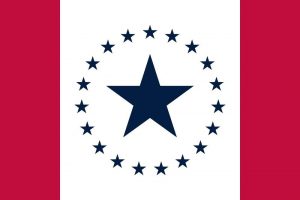 The Forward Mississippi committee released a statement on Friday calling for the support of the Stennis Flag.

Forward Mississippi is a subgroup on campus that is comprised of student leaders from the University of Mississippi School of Law.

“This student-led initiative joins us together in a bipartisan way to push for positive change in Mississippi,” Ethan Booker, chair of Forward Mississippi, said. “We are calling on The University of Mississippi to lead the efforts of change by raising the ‘Stennis Flag’ on campus.”

The statement points out that, of the students who attend Ole Miss, 54 percent are from the state of Mississippi. The other 46 percent are from different states across the U.S. and more than 80 different countries. The Ole Miss student body is comprised of different races, speak various languages, practice different religions and hold a variety of political views.

“No other state in the country challenges its universities to choose whether to fly a state flag depicting confederate imagery, or not to fly one at all,” Booker said. “The current Mississippi flag was taken down on the Ole Miss campus in 2015 because of its Confederate imagery and the hate it symbolizes. The current flag gives a false perception of all Mississippians and does not represent us as a state. The current flag also restricts us economically. With a change to our flag, Mississippi can begin to heal and become more prosperous, keeping its graduates from having to look outside of the state for work.”

According to the Forward Mississippi committee, the Stennis Flag is something that can unite all residents of Mississippi, because the 19 stars that form a circle around a larger star are a representation of patriotism, while the larger star represents Mississippi as being the 20th state to join the nation in 1817. The circle itself is a symbol of unity and continuity, drawn from artifacts of indigenous people. The Mississippi spirit of service is symbolized through the inspiration from the Service Star Flag, which honors active-duty service members. The colors of the flag represent white for spirituality and possibility, and red for the spilled blood of Mississippians who gave their lives honorably in pursuit of liberty and justice for all.

“The ‘Stennis Flag’ has a strong design that can unify Mississippians with symbolism that truly represents this state,” Booker said. “This flag looks to Mississippi’s bright future instead of options that circle us back to the past or provide a ‘cover-up bandage’ with no real meaning. It is vetted, branded, and unifying.”

The Stennis Flag has since been renamed the “Hospitality Flag,” after Laurin Stennis, the designer of the flag, announced on Twitter that she will be stepping away from the fight for a new state flag.

Laurin Stennis is the granddaughter of the late U.S. Senator John C. Stennis. He served for 41 years before he retired in 1989 and was a segregationist for much of his career.

“I understand the hurt and potential harm my last name can cause,” Stennis said in a statement. “But I will continue to fight for Mississippi and her people, which I consider both a duty and a joy.”