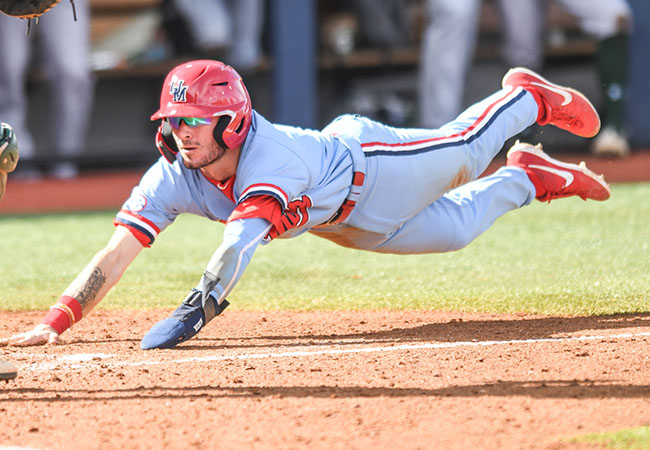 Ole Miss' Anthony Servideo scores against Alabama-Birmingham at Oxford-University Stadium in Oxford, Miss. on Sunday, March 10, 2019. Servideo was drafted by the Baltimore Orioles in the third round of the 2020 MLB Draft this month. (Bruce Newman, Oxford Eagle via AP)

The former Ole Miss shortstop was taken by the Baltimore Orioles in the third round of this year’s MLB Draft. In doing so, Servideo will get the opportunity to play for the same organization as his grandfather.

Curt Blefary played for the Orioles from 1965 to 1968 in the first four seasons of his MLB career, which lasted for seven years total. Getting the chance to play at the next level was always the goal for Servideo, but he said doing so with the same ball club as his grandfather is a bit surreal.

Servideo was very young when his grandfather passed away in 2001 at the age of 58, but growing up, his mother told him stories that helped shaped his dream of wanting to become a professional baseball player.

“I was too young, unfortunately, to know him. I was about two years old when he passed,” Servideo said. “My mom and my uncle and my grandma all told me stories, and I would ask about him almost every time I saw him. It’s cool. We have a lot of pictures of him and memorabilia, and growing up he’s been my idol and I want to follow in his footsteps. I’m super thankful to be able to look up to him.”

The draft process was one that was unique for everyone in 2020. The college baseball season was cut short after 17 games, with Ole Miss riding the nation’s longest-active winning streak, right when the Southeastern Conference halted play due to COVID-19.

Servideo was having a solid start to his junior campaign, hitting .390 at the plate for five home runs and 17 runs batted in through 17 games. Servideo said getting less than two and-a-half seasons in the SEC was still enough for him to feel prepared enough for the minors and beyond.

“Playing in the SEC was very important for me,” Servideo said. “It helped me develop as a player. Every night, we’re facing the best of the best, and being able to compete against them and have success against them it will translate into pro ball. It will help me feel comfortable playing in front of those large crowds. I’m excited to transfer my game from the SEC to to pro ball.”

In normal years, the MLB Draft is going on during the Regional round of the NCAA Baseball Tournament. This year, players were stuck at home in quarantine, relying on Zoom meetings with scouts and phone calls with organizations interested in them.

The COVID-19 pandemic created challenges, but Servideo said he relied on his support staff, as well as Ole Miss head coach Mike Bianco, when looking for advice throughout the whole process.

“The draft process was crazy for me. I dealt with it a little bit in high school, but this year was serious,” Servideo said. “The process leading up to the draft was tough, and it was a roller coaster. Ever since the season ended, the draft has been on my mind, and it’s different with playing the whole year and the draft at the end of the year, because you’re focused on winning a national championship, you’re not really focused on the draft. So, I had a lot of time to think about it. I spent a lot of time with my friends and family thinking about it. In the end, I can’t control what happens. I did everything I could to put myself in a position to play at the next level, and I just tried not to think about it as much as I could.”

The 2020 minor league season is canceled due to COVID-19, with MLB still trying to figure out when and how they will play an abbreviated season in late summer and early fall. Servideo will have to wait until next February, when presumably, Spring Training for the 2021 season will begin.