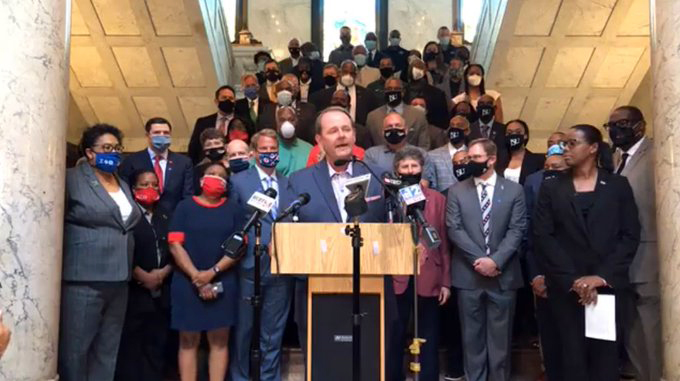 Kermit Davis speaks during a press conferece at the Mississippi State Capitol on Thursday, June 25, 2020. Davis was joined by coaches and athletic directors from colleges across Mississippi who were speaking with legislators regarding the changing of the state flag.

Coaches and athletic directors from all eight of Mississippi’s public universities visited Jackson in solidarity to meet with state representatives and senators as reports of a potential vote to change the flag was coming sometime Thursday or Friday, which is when the current legislative session ends.

Davis spoke at a press conference, along with Mississippi State University’s new women’s basketball head coach Nikki McCray, calling for a change to be made and a new flag voted on.

“We know that time for change is now,” Davis said. “It’s a great opportunity for our state, the state that I grew up in, to make change for the better. It begins with a flag that represents all the citizens in our state.”

Davis’ comments come a day after former Ole Miss basketball player Blake Hinson conducted an interview with the Daytona Beach News-Journal about transferring from Ole Miss to Iowa State due to the state flag.

“To make a general statement, it was time to go and leave Ole Miss,” Hinson stated in the article. “I’m proud not to represent that flag anymore and to not be associated with anything representing the Confederacy.”

Last week, the NCAA’s Board of Governors voted to amend their policy on Confederate symbols to include banning postseason and championship events from taking place in states where the symbol is prominently placed. The NCAA’s change in policy explicitly stated Mississippi was the only state affected by this change.

Southeastern Conference commissioner Greg Sankey issued a statement last week as well, saying the SEC would reconsider not holding championship events in Mississippi until the state changed the flag.

Ole Miss took action in 2015, removing the Mississippi state flag from its campus. The City of Oxford also removed the flag from City Hall and other buildings in recent years.

“We removed the flag from our campus five years ago, so we’ve made it clear that it doesn’t represent who we are at Ole Miss,” Kiffin told ESPN on Thursday. “Today is another big step in doing our part to move the state forward and ensure a more welcoming environment for everyone. This is extremely important to me and to our players. Time to change.”

Kiffin and his players, along with other Ole Miss student-athletes and coaches, took part in a Unity Walk earlier this month. Linebacker MoMo Sanogo and other players are also taking part in a L-O-UNITED march on Saturday, advocating the removal of the Confederate statue from in front of the Lafayette County Courthouse on the Downtown Square and against police brutality.

Servideo reflects on following in his grandfather’s footsteps, “crazy”…