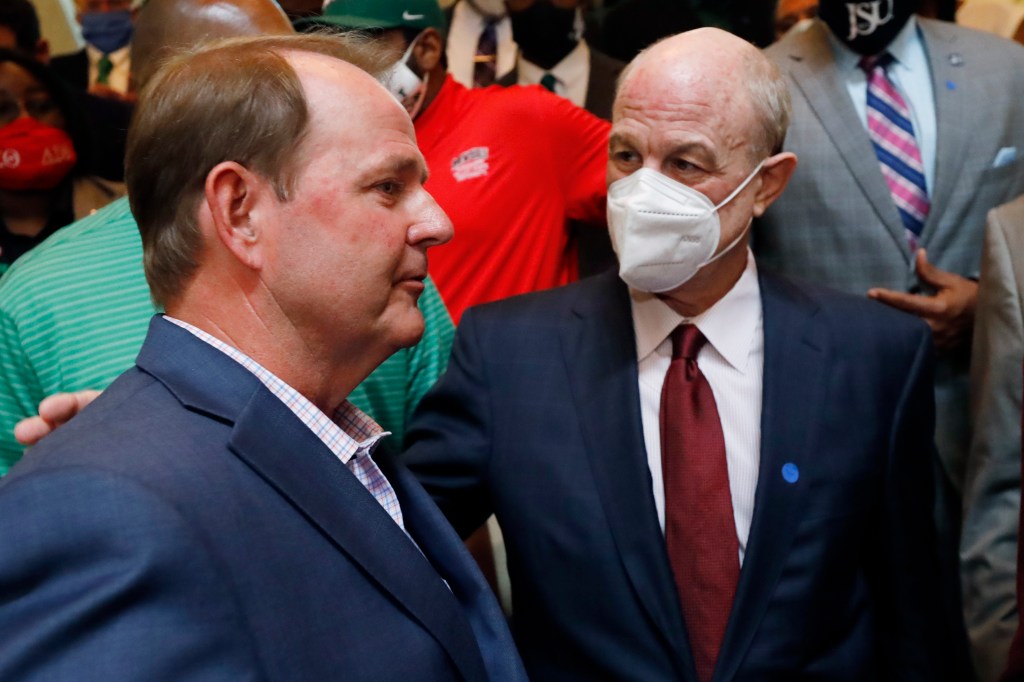 Ole Miss basketball coach Kermit Davis, left, confers with Mississippi State basketball coach Ben Howland, following a news conference where the athletic departments of the state's public universities called for a change in the Mississippi state flag, at the Capitol in Jackson, Miss., Thursday, June 25,2020. Several head coaches met with both Lt. Gov. Delbert Hosemann and Speaker Philip Gunn in addition to their lawmakers, to lobby for the change by their respective bodies. The current flag has in the canton portion of the banner the design of the Civil War-era Confederate battle flag, that has been the center of a long-simmering debate about its removal or replacement. (AP Photo/Rogelio V. Solis)

Sports have been non-existent for most of 2020, but last week in Mississippi, they made their biggest assist of the year.

The state, country and world all had their eyes fixated on the Mississippi Capitol on Sunday as legislators made history by voting to take down the current state flag and replace with a yet-to-be-determined one, designed possibly as early as this fall.

The current flag, which featured Confederate emblems, has been a large source of divisiveness in Mississippi for a long time, and that was turned to 11 in recent months due to civil and social unrest across the United States.

For many weeks leading up to Sunday’s historic vote, it felt as if Mississippi was going to remain status quo about the flag issue – allowing both sides of the argument to have their say and then move on to other things, as has been done time and time again.

This year was different when sports entered into the legislative arena nearly two weeks ago.

The following morning, the NCAA Board of Governors took an even stronger stance when they amended their Confederate flag policy to ban championship events from being held in Mississippi, due to the state flag’s prominent display of Confederate emblems.

Mississippi was specifically the target of the NCAA’s decision, as their statement even said, “Mississippi is the only state effected by this policy.”

As outside entities began drawing lines in the sand that could affect Mississippi and it’s Universities from a financial and recruiting level, Mississippi athletes began to voice their opinions on the flag debate.

Mississippi State running back Kylin Hill quote-tweeted Governor Tate Reeve’s tweet regarding the state flag on June 22, stating he would not play the upcoming season if Mississippi’s flag was not changed.

Three days later, the entire Mississippi collegiate coaching contingency descended upon Jackson to speak with legislators and lobby to change the flag and brought a simple message to the Capitol: It’s Time.

“We know that time for change is now,” Davis said. “It’s a great opportunity for our state, the state that I grew up in, to make change for the better. It begins with a flag that represents all the citizens in our state.”

These two nationally-prominent coaches, who were brought to Mississippi this winter to take over two of the top programs in the state, were now directly involved with trying to change something that nobody else in the 126-year history of the flag has been able to do.

Sports and politics are viewed like church and state. The two are not supposed to mix and those who try to get the old adage of “stick to sports” in their Twitter replies.

But this time, Mississippi sports saw the changing of the tides and realized they could be the final ingredient needed to create the change many Mississippians have long been asking for.

Two days after the coaches visited the Capitol, that change began as the House and Senate both voted to suspend the rules and decreed a referendum was not needed to change the flag 19 years after they left it up to the people.

For Ole Miss fans, the comparison to the 4th and 25 play against Arkansas in 2015 was used for how they felt the vote could go or the suspense they felt. The comparison was not far off, as the Senate got just enough votes on Saturday to push for the bill to be voted on the following day.

On Saturday, Ole Miss football players MoMo Sanogo and Ryder Anderson put together an LOUnited march from the Square down University Avenue to the Old Armory Pavilion. As hundreds of people flooded the street, speaking out against police brutality, the Confederate statue in front of the Lafayette County Courthouse and the state flag, one of those was experiencing change in real time.

By the time the event concluded on Saturday, the state flag was one day away from no longer being a source of contention.

On June 28, 2020, a day that will now reside in history books, the state flag was voted down and Mississippi entered a new era.

There were many moving parts and groups responsible for the flag changing, but no one can deny the immeasurable impact Mississippi’s sports community had on making what many felt was impossible, possible.