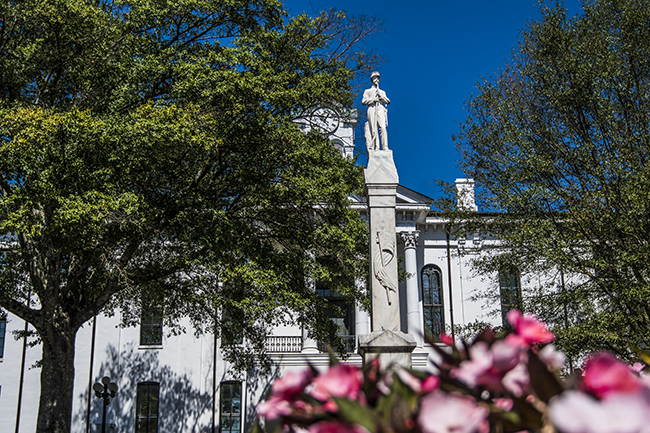 The Confederate monument on the Lafayette County Courthouse lawn will remain where it stands.

On Monday night, the Board of Supervisors decided at the last minute to add discussion of the statue to their meeting agenda.

They voted 5-0 to keep the statue, but not without first speaking their minds.

Larry Gillespie, District 2 Supervisor, said that while he understands the reasoning for people wanting to remove the flag, he cannot condone violence.

“I do understand how things like statues and street names can be offensive to some. We had to make a call on what the government should change and what shouldn’t change,” Gillespie said. “Not everyone in this room would even agree on where to draw that line, and that’s okay. I don’t believe the current national movements are seeking racial reconciliation in most cases. Too many governments have set idle as violence and distraction tear their cities apart, all excused because they are fighting oppression. This inaction is inexcusable, and public safety will always come first for me.”

Chad McLarty of District 4, said he agreed with Gillespie and added that he understands what it is like to be judged for the color of his skin.

“Racism is a terrible thing, just like slavery was,” McLarty said. “At no time in my life have I ever condoned either one. Racism is a two-way street, though. I myself have been a victim of racism due to the color of my skin. I’ve also been a victim of police brutality. What I do know is that there are a lot of bad people in this world and no matter how many statues, flags, monuments or pancake boxes you take down, it will still exist. The United States of America is so divided right now, it personally makes me sick.”

McLarty also mentioned that, in his eight years as a supervisor, the statue issue has been brought before the board three times. McLarty stated that the board originally desired to take more time before bringing the issue to a vote, but due to public outcry, they felt the need to move ahead with a formal vote.

Board President Mike Roberts closed out the statements, saying he chalked up the issues of the community to a lack of unity, and that protesters on both sides did not exhibit “common sense.” He also expressed support for law enforcement officers, saying the board has done their part to offer support equal to what officers show in the community.

“You’ve seen us and our community and our county be drug into a national movement behind police brutality. If you think it doesn’t take a toll on our men and women that serve this county to protect us, you’re wrong,” Roberts said. “These men and women get up and go to work every day whether they believe the way I do or you do or whoever else. … I would encourage you all to be mad at us, and do what you want, but man, do we have some great men and women in this community that protect us and give us the right to have these differences of opinion.”

The board’s next regular meeting is scheduled for July 13.