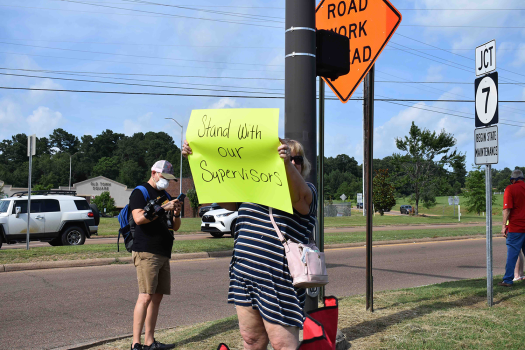 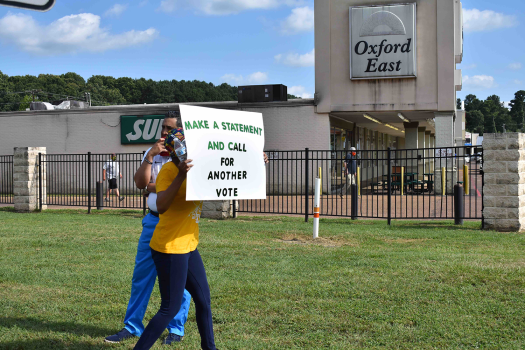 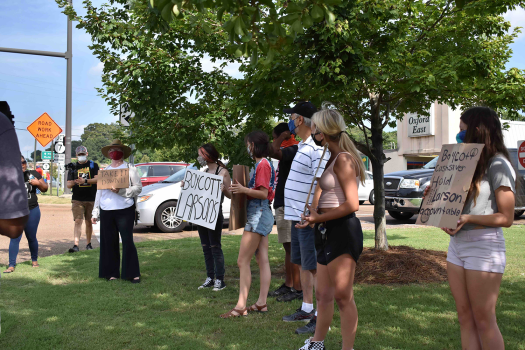 After a unanimous vote from the Lafayette County Supervisors to keep the Confederate statue on the Square, protestors took to Larson’s CashSaver on Friday to speak against District 1 Supervisor Brent Larson’s vote and lack of statement.

Protesters stood on University Avenue, on the sidewalk in front of Regions Bank and McDonald’s near the CashSaver entrance. They held signs that said, “Make a Statement and Call for Another Vote” and encouraged shoppers of Larson’s CashSaver to shop at Kroger or Chicory Market instead.

“Over 90 percent of Brent Larson’s staff is Black,” protester Alexandria White said. “Not a vote. You didn’t even hear us. You didn’t even see us. The nerve of you. We patronize his business. We work for him. Not anymore. The best way to get someone to listen to you is to mess with their pockets, and then we’re going to mess with the rest of their pockets. That’s what we do.”

In spite of the Supervisors’ decision, the fight to remove the Confederate statue from the courthouse lawn is still going on for many residents of Lafayette County. In addition to protesting at Larson’s CashSaver, protestors continue to stand at the Square.

“This is what I want people to understand,” White said. “I hear people all the time, ‘Well, I have a Black friend and I employ Black people, so I can’t be racist.’ Last time I checked, slave masters employed Black people. Slave masters had Black kids. So your rationality doesn’t make any sense. … Not one vote. That’s the problem. Like they don’t even care about the Black community.”

On the other hand, the fight to keep the statue on the Courthouse lawn is over for some. Counter-protesters stood alongside protesters of Larson’s with their own signs that said things like, “Stand with Our Supervisors.”

“I’ve known Brent Larson since he was a small child,” one counter-protester said. “He is not a racist and people just need to get over it. They voted to keep the statue, and that’s that.”

Larson, who co-owns of Larson’s CashSaver, said he was overwhelmed by the number of people that came out to support his business.

“It turned out to be counter-productive for the protesters, because we had more support here than we had protesters,” Larson said. “Lafayette County and Oxford really showed up and showed out. They were wonderful.”