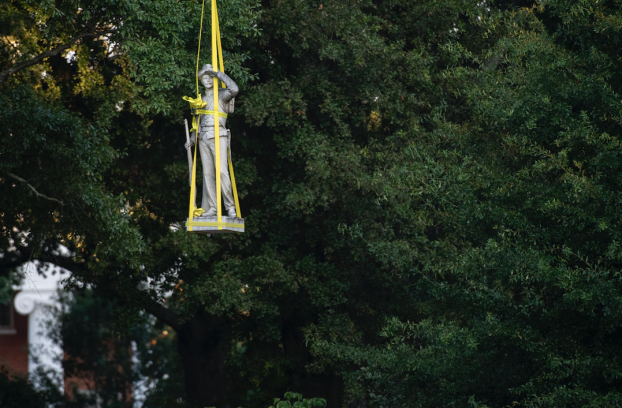 On Tuesday, the Confederate statue that sat at the entrance of the Lyceum Circle on the University of Mississippi campus was removed from its longtime home.

The culmination of a 16-month process began its final steps as the statue was disassembled and transported across campus to the Confederate cemetery behind C.M. “Tad” Smith Coliseum, where it will now reside.

Ever since the University’s relocation plan was approved by the Institute of Higher Learning’s Board of Trustees last month, there has been intense scrutiny and pushback by several University groups about the renovations that were going to take place at the cemetery once the statue was moved.

A rendering included in the plans showed a pathway to the cemetery, a bench, lighting and new headstone markers for those buried within its confines. Since last month’s approval, UM Chancellor Glenn Boyce stated the bench is no longer apart of the renovations for the cemetery, and clarified other points, as well. For example, the pathway will not be brick pavers, but will instead be stamped concrete; the landscaping will also not be as costly as what was depicted.

Boyce issued a statement on the statue’s removal, and mentioned another aspect of the proposed plans – the headstones markers – will not be installed in the cemetery.

Last month, Boyce requested a ground-penetrating radar survey inside the cemetery walls be conducted to determine the depth of cover material over the buried remains. The results of that survey came back in two parts, on June 26 and June 29.

“The survey concluded that in some places, minimal ground cover could create a high probability of disturbing the graves,” Boyce said. “Consequently, and after many conversations and serious consideration, I feel excavating within the walls of the cemetery presents a significant risk of disturbing remains. This is a risk I am not prepared nor willing to take.

“This has been an important issue for our university, and today’s relocation is a meaningful change for our community. I’m inspired by our ongoing commitment to strengthen our campus as a positive, productive and welcoming educational environment for all.”

The statue was installed in its new location on Tuesday afternoon, and work continued on Wednesday to complete the relocation process.

Faculty in the University of Mississippi Department of History released a statement on July 13 in an effort to set... read more