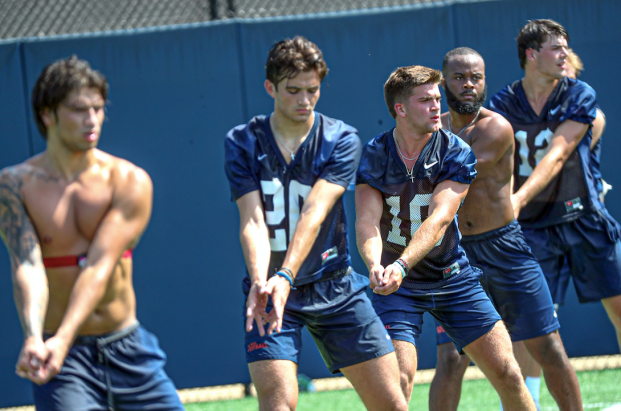 Tuesday brought a small slice of normalcy to the Ole Miss football program, as the first stage in this summer’s mandatory workouts began.

It is technically the second phase of the new summer program for college football, due to the adjustments made because of the COVID-19 pandemic. Tuesday was mandatory participation for players after over a month of voluntary workouts were allowed, starting June 8.

The NCAA set new protocols for summer workouts this year, since a majority of football programs across the country were not able to have spring drills or a scrimmage. This second phase runs from Tuesday to July 23, wherein players are required to attend workouts and are given eight hours of supervised work each week, which includes film sessions, a team activity period and strength and conditioning drills.

It is also the first chance this summer that Lane Kiffin is allowed to interact with his players on the practice field and the first time he has seen his team in any semblance of a practice or workout setting since being hired last December.

Following Tuesday’s first day of workouts, Ole Miss strength and conditioning coach Wilson Love provided some comments on being another step closer to football being played this fall.

“It was like first day of fall camp. It was incredible,” Love said. “The biggest thing right now is, what’s going on outside these walls is tough on these kids. I want everybody to understand that. It’s tough right now. There are a lot of unknowns. But every single day there is one goal: Go 1-0 and focus on the day. Everything else will take care of itself.”

If all goes according to the new plan put in place by the NCAA, the third phase will run from July 24 to Aug. 6, which will serve as the run-up to the opening of fall camp, still scheduled to begin next month. The third phase allows players get up to 20 hours of work in each week, but not exceeding more than four hours a day. Walk-throughs, meetings and more strength and conditioning workouts are also allowed in the third phase.

“The guys are sprinting fast, jumping and cutting,” Love said. “It’s everything that you want. I can go home tonight thinking, ‘Okay, we’re okay. We’re going to be okay.'”

Currently, Ole Miss is still scheduled to begin their 2020 season in Houston, Texas against Baylor at the Texas Kickoff on Sept. 6. The Southeastern Conference is still mulling over how they would like to go forward with a fall sports season, having already delayed competition for soccer, volleyball and cross-country to until at least after Aug. 31. A decision on the football season from the league office is expected later this month.

After weeks of discussions, hypotheticals and what-ifs, the Mississippi High School Activities Association officially decided on a path for its... read more