Lee Ingram honoring late brother and helping others through music 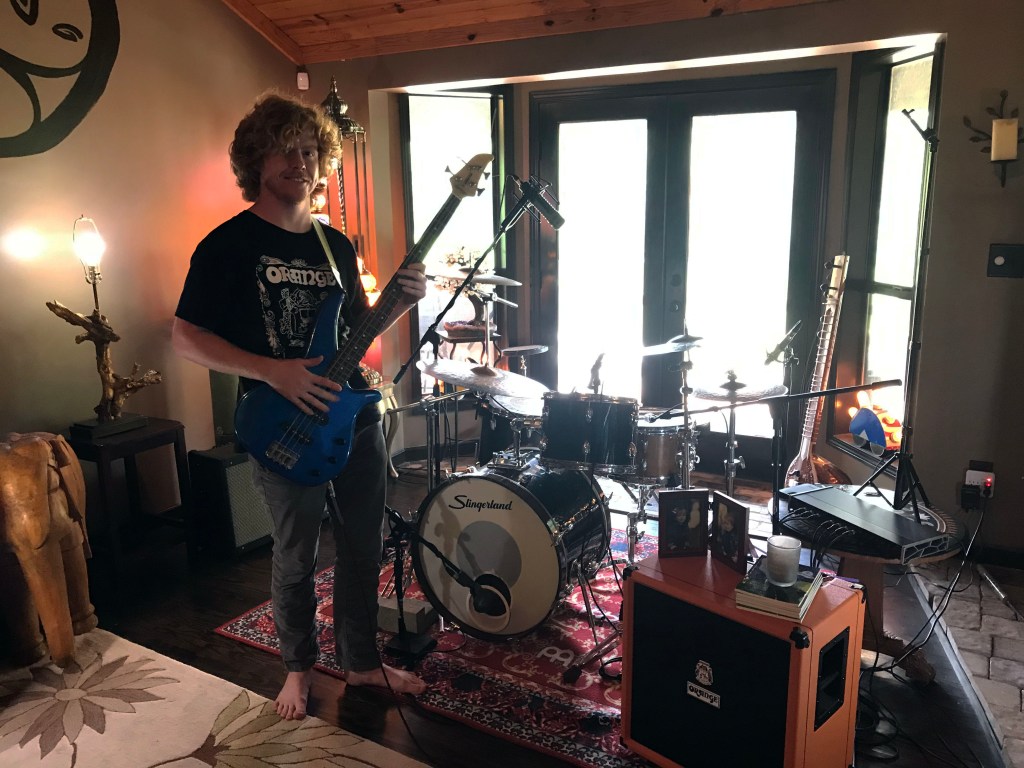 Lee Ingram stands with his brother’s bass guitar, which is uses to create music as a means to to help those dealing with mental health and thoughts of suicide through his new “Groove Ginger” project. (Jake Thompson/Oxford Eagle)

Over the years Lee Ingram has chosen to learn about who his brother, Ben, was and the struggles he was dealing with that led to him taking his own life in 2017.

On the third anniversary of losing his brother, Ingram is starting a passion project that he has been mulling over for years, but a pandemic and forced quarantine have provided the proper time to devote to it.

Under the name “Groove Ginger,” Ingram is honoring his brother through music while also hoping to help others dealing with mental health issues and thoughts of suicide before it is too late for them.

Each year Ingram has chosen a different way to commemorate his twin brother and keep his memory alive. On the first anniversary, Ingram published a book full of his brother’s writings that he found after Ben’s death. The book is titled “Dreams About Food: Stories by Ben Ingram” and has been purchased by 400 to 500 people, according to Ingram. The book is available to purchase on Amazon.

Along with publishing a book, Ingram helped create a scholarship in his brother’s name that is awarded to at least one Ole Miss junior accepted as a late entry into the Sally McDonnell Barksdale Honors College.

Last year, Ingram organized the “Walk With Ben” event that took place in Oxford and Ridgeland, where he and his brother are from.

“I did something that kind of commemorated his writing. We’d done things around mental health and suicide and I was like, ‘Well, what about music?'” Ingram said. “I play music. I love playing the drums. I’ve played some bass and my brother and I had a huge bond over music. So, I was like, ‘Well, that’s perfect. I’ll do that.'”

With the world shutdown due to the COVID-19 pandemic, Ingram rented a house from a friend of his that provided the perfect space for him to set up his drums and recording equipment to help bring “Groove Ginger” to life over the past few months.

Ingram has had the idea of putting a YouTube channel together of him drumming to songs, so he decided to combine to the two projects together with the initial launch built around suicide awareness.

The first push will consist of five videos with Ingram doing one video in Ben’s honor. That video was to the song “My Hero” by the Foo Fighters. Ingram also did a voice over, talking about his brother.

All of the videos Ingram has posted to his social media accounts have had the phone number to the suicide hotline somewhere on the screen.

One key piece that helps tie Ingram and his brother together through this project is a bass guitar. It is not some random bass guitar that Ingram picked up to start this, it belonged to Ben.

But as the tale as old as time goes, Ben purchased the bass with the hopes of taking lessons and learning to play. Instead, life took Ben back to the pen and paper, leaving the bass guitar behind.

Ingram has since picked it up and keeping his brother’s memory alive by playing it in his videos.

“I would consider us both creative people,” Ingram said. “We were both huge lovers of music. The last time we really hung out was at a Radiohead concert. So, when I’m doing all this I think about him a lot. …It’s pretty special. When I’m playing and I’m kind of in my zone, when you’re playing music you’re in this flow state but you’re still trying to make decisions. ‘Okay, what should I do next?’ It is nice to be in that moment like, ‘What would Ben think is cool?'”

In 2017, Ingram dealt with the loss of his brother as well as two of his musical heroes in Linkin Park’s Chester Bennington and Chris Cornell of Soundgarden and Audioslave fame. Both committed suicide within months of Ingram’s brother also taking his life.

Ingram is playing songs from his heroes lost as well as songs his brother loved. Most songs will tie in mental health awareness but Ingram said not every song he performs for the project will have that theme.

To find all of Ingram’s videos, visit grooveginger.com, which links directly to his YouTube page.

OPD “Behind the Badge” introduces police officers to the…