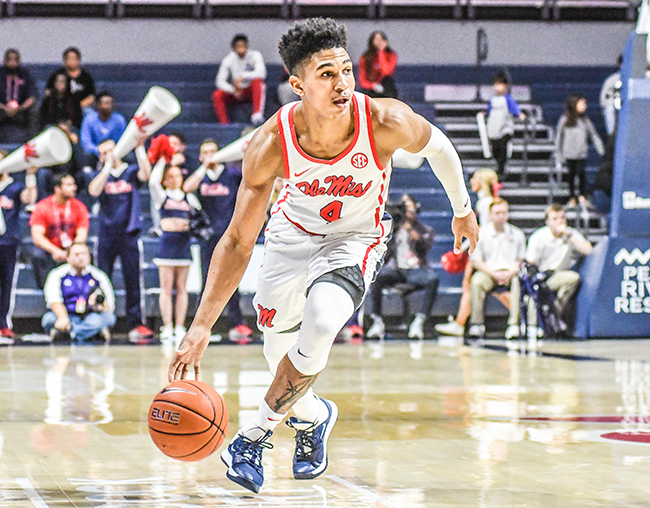 Ole Miss guard Breein Tyree dribbles against Tennessee Tech at the Pavilion at Ole Miss, in Oxford, Miss. on Sunday, December 29, 2019. The former Rebel received an invite to this year's NBA Combine on Monday. (Bruce Newman, Oxford Eagle via AP)

Breein Tyree received an invite to the upcoming NBA Combine on Monday, giving him an opportunity to showcase his talents and possibly find a way onto an NBA roster next year.

The NBA released their combine list on Monday with Tyree one of the 105 players to receive an invitation to participate. The combine was originally scheduled to take place May 21 through 24 in Chicago, but the COVID-19 pandemic cause it to be indefinitely postponed.

There is talk of the combine now taking place after the NBA concludes their 2020 season, which is set to resume on Thursday in Orlando. The season will end on Aug. 20 and the combine has reportedly been eyed to take place sometime shortly after, if the combine is held at all this year.

The former Ole Miss guard found his way onto the invite list based on votes from NBA teams. There has been discussion of the list being trimmed down to 70 players ahead of the combine, which would be determined by votes from the NBA front offices.

Currently, there are 22 Southeastern Conference players who have received an invite to the combine, including Tyree as the lone representative from Ole Miss. Mississippi State saw two of its players receive invites, Reggie Perry and Robert Woodard II.

During his senior season, Tyree averaged 19.7 points, 3.7 rebounds and 2.5 assists. He shot 42.7 percent from the field and was voted First Team All-SEC by league coaches.