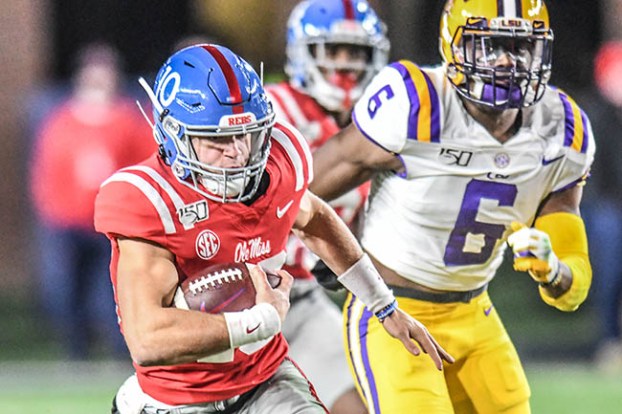 The Lane Train will not be leaving the station at its originally scheduled departure time.

On Thursday, the SEC presidents and chancellors voted to approve a proposed 10-game conference schedule that will begin on Sept. 26 with the SEC Championship game now scheduled for Dec. 19 in Atlanta.

The SEC’s athletic directors met virtually on Wednesday and approved the proposal.

Due to the COVID-19 pandemic, conferences across the country have altered their respective schedules and are shifting to a conference-only format to help keep travel to a more regionally-focused area.

The change makes the start of Ole Miss’ football season begin three weeks later than it was originally scheduled to. The Rebels’ season opener against Baylor in Houston, Texas as part of the Texas Kickoff Classic is now canceled due to the new schedule of SEC-only opponents.

The Rebels, and all 14 SEC teams, will have one mid-season open date as well as an open date on Dec. 12, one week before the SEC title game.

“This new plan for a football schedule is consistent with the educational goals of our universities to allow for the safe and orderly return to campus of their student populations and to provide a healthy learning environment during these unique circumstances presented by the COVID-19 virus,” SEC commissioner Greg Sankey said in a statement. “This new schedule supports the safety measures that are being taken by each of our institutions to ensure the health of our campus communities.”

A revised schedule will be released at a later date once approved by the SEC athletic directors.

There are only eight SEC games scheduled in a normal season, meaning Ole Miss will add two new conference opponents to its unique 2020 schedule. Who those two teams will be is not known yet, but has been reported by several outlets that the SEC is considering those two games be each team’s 2021 and 2022 cross-division opponents. For the Rebels that would be Tennessee (2021) and Kentucky (2022).

“We appreciate the leadership of Commissioner Sankey and our league’s chancellors, presidents and my fellow athletics directors for taking this first major step toward a 2020 football season for our institutions,” Ole Miss athletics director Keith Carter said in a statement. “Most of all, we are grateful that our football student-athletes will have the opportunity to resume competition. We will continue to allow the health and safety of all those involved to drive our decisions as we move forward in the process.”

Carter also said announcements regarding attendance plans for season ticket holders, students and fans along with stadium capacity limits will be revealed in the coming days as the fall semester is set to begin on Aug. 24.

The other fall SEC sports of women’s soccer, women’s volleyball and cross-country are not able to begin competition until at least Sept. 1. The league has not made any other announcements pertaining to that decision made earlier this month.

Oxford is known for having championship-caliber tennis players in the junior ranks and that was proven once again this past... read more