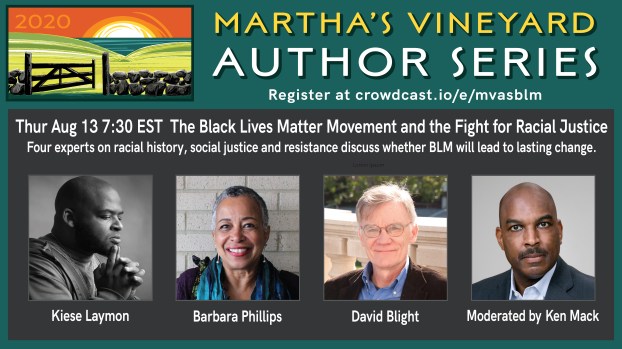 Martha’s Vineyard Author Series will present The Black Lives Matter Movement and the Fight for Radical Justice event on Thursday, August 13 at 7:30 p.m. via the Crowdcast Platform.

The event features Oxford writers Barbara Phillips, David Blight, Kiese Laymon, and Kenneth Mack as they discuss the historical context that surrounds the Black Lives Matter Movement and how it can lead our country to lasting and systemic change.

The Black Lives Matter movement has been fueled by the country’s punitive history of incarceration and government-sanctioned violence toward African Americans and powered by the pervasive presence of social media. It has evolved from a Twitter hashtag into this generation’s civil rights movement.

Martha’s Vineyard Author Series has brought together four writers and scholars with unique experiences and perspectives. They plan to discuss the background and goals as well as the Black Lives Matter movement, how we, as a country, reckon with our racist history, and exploring solutions for creating an anti-racist society.

The Black Lives Matter Movement and the Fight for Radical Justice will be the last event of the summer for Martha’s Vineyard.

Barbara Y. Phillips is a social justice activist, scholar and writer. Currently an Adjunct Professor, she was an Associate Professor of Law at the University of Mississippi School of Law and a civil rights litigator specializing in voting rights as partner at a law firm and as staff attorney with the Lawyers’ Committee for Civil Rights Under Law. She is a member of the board of directors of the Women’s Learning Partnership for Rights, Development and Peace. Phillips many publications include the three essays published in Voices of Civil Rights Lawyers: Reflections from the Deep South, 1964-1980.

Kiese Laymon is a black southern writer, born and raised in Jackson, Mississippi. Laymon is the Ottilie Schillig Professor of English and Creative Writing at the University of Mississippi and has published three books including the award-winning Heavy: An American Memoir which won numerous Best Book awards in 2018 including the Andrew Carnegie Medal. Laymon is the recipient of the 2019 Austen Riggs Erikson Prize for Excellence in Mental Health Media and has written essays, stories and reviews for numerous publications including Esquire, McSweeneys, The New York Times, and Ebony.

David W. Blight is a teacher, scholar and public historian. He is Class of 1954 Professor of American History and Director of the Gilder Lehrman Center for the Study of Slavery, Resistance, and Abolition at Yale University. Blight is the author or editor of a dozen books, most recently: Frederick Douglass: Prophet of Freedom which received the Pulitzer Prize. He regularly writes articles and essays on abolitionism, American historical memory, and African American intellectual and cultural history and is a frequent book reviewer for publications including the New York Times, the Washington Post Book World, and the Chicago Tribune.

Kenneth W. Mack is the inaugural Lawrence D. Biele Professor of Law and Affiliate Professor of History at Harvard University as well as the co-faculty leader of the Harvard Law School Program on Law and History. Mack is the author of numerous books and articles including Representing the Race: The Creation of the Civil Rights Lawyer, which was a Washington Post Best Book of the Year. Mack’s work has been published in the Harvard Law Review, Yale Law Journal, and The Washington Post, among others.

Land development across Molly Barr to continue with planning

Construction on the north side of Highway 30, west of Highway 7, will not be letting up anytime soon. The... read more