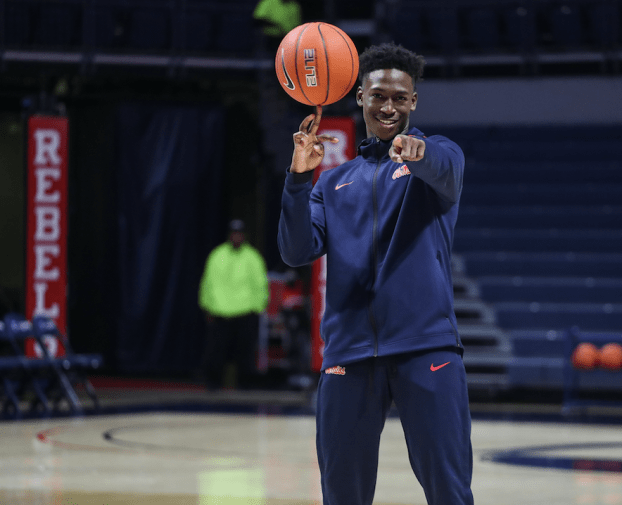 Ole Miss’ Jarkel Joiner warms up ahead of the Rebels game against vs Middle Tennessee State on December 14th, 2019 at The Pavilion. After sitting out a year due to transfer rules, Joiner is primed to play a key role for his hometown team in front of friends and family. (Joshua McCoy/Ole Miss Athletics)

Taking the floor for the first time in Rebel uniform is something Jarkel Joiner has dreamed about since he was a kid.

This fall, that dream becomes a reality when the Oxford native will make his debut in front his hometown fans and family as a key contributor in head coach Kermit Davis’ lineup.

Getting to that point was a journey all in itself, though. After graduating from Oxford High School, Joiner traveled 1,897 miles to Bakersfield, Calif. where he joined the Cal State Bakersfield Road Runners.

There, Joiner played for former Ole Miss head coach Rod Barnes, who was a long time family friend. He found success in California, playing in 30 games as a freshman and the only player to start all 34 games as a sophomore. The stat line was there, but Joiner entered the transfer portal in the spring of 2019.

Schools courted him, but when Davis and Ole Miss reached out the former Charger standout decided it was time to come home. Transfer rules dictate that Joiner had to sit out the 2019-20 season, but he took that opportunity to sit under the learning tree and better himself on the court while spending a season off.

“You really learn a lot off the court,” Joiner said. “You see things differently when you’re off the court. You read situations differently. I learned a lot about the clock. The timeouts, the media. I really bought into that. …Coach Davis, he’s one of the best coaches I’ve played for. He’s so smart. He’s very detailed. Hard-nosed and he loves the game of basketball. When you got a coach that loves the game, you’ll run through a wall for him.”

Now, Joiner returns home where he was a star in the Mississippi high school basketball world. The former Charger earned EAGLE Player of the Year three out of his four seasons as a varsity player at Oxford and help lead them to a semifinal appearance during 2017 MHSAA state playoffs.

Having that reputation precede him as he prepares to make his debut for the hometown school he played just minutes away from growing up there is the expectation for Joiner to put pressure on himself though that is not necessarily the case.

“To be honest there’s no pressure at all,” Joiner said. “I’ve been playing in front of this town all my life. So, when you put in a lot of work and you come to the game there’s no pressure. It’s fun. Basketball is fun so you shouldn’t put pressure on yourself.”

Joiner knows, and hopes, Oxford boys head coach Drew Tyler will be in the stands this fall watching every minute. The two still talk to each other every day and Joiner views Tyler as another dad, but he also knows that coaching never stops.

“He’ll probably still be coaching me from the stands,” Joiner said.

Before Joiner returned to Oxford there was another hometown kid who made good in DK Metcalf, who made highlight reels 12 Fridays in the fall for four years before coming to Ole Miss.

Knowing a former teammate in Metcalf, who also played basketball at Oxford, had already gone through the process of performing on the biggest stage in the Southeastern Conference in his own backyard, Joiner asked for advice as the two remain close friends.

“Me and DK, we’re really close,” Joiner said. “We’re brothers. I viewed him as my big brother. He gave me advice on coming here, especially when I’d come home we’d go out to eat. He’d give me advice about everything. How to handle certain stuff and to be smart about everything and you can’t put yourself in a lot of situations.”

The COVID-19 pandemic has changed everything in 2020, including how players are handling their free time away from practice. Joiner has made the choice to be proactive when it comes to social distancing and “be in his own bubble” and not spend a lot of time with friends as he is wanting to play basketball this season and understands the risk of hanging out in large groups.

On the court, the pandemic has affected practices. Joiner said he wears a mask when at the Touhy Center, including during practice and following the protocols and guidelines. Wearing a mask has been a transition for a sport where constant movement is part of the game.

“You can’t really breath but I guess it works on our conditioning,” Joiner said. “It’s an adjustment, having something over your mouth.”

Ole Miss is currently scheduled to open their season at home against New Orleans on Nov. 10. When Joiner takes the floor for the first time, it is a moment he’s thought about for a long, long time and one he intends to soak in for as long as possible

“I think about it every day,” Joiner said. “The smell of the popcorn. Taking a deep breath and soak it all in and just get ready to have fun. Go out there and do what I’ve been doing my whole life. I can’t wait to get back out there and play in front of my friends and family or the fans here. I know how crazy they get and they love basketball. I can’t wait to play in front of them.”

Parents, fans, players and coaches who come to mTrade Park will now be required to wear a mask, starting with... read more