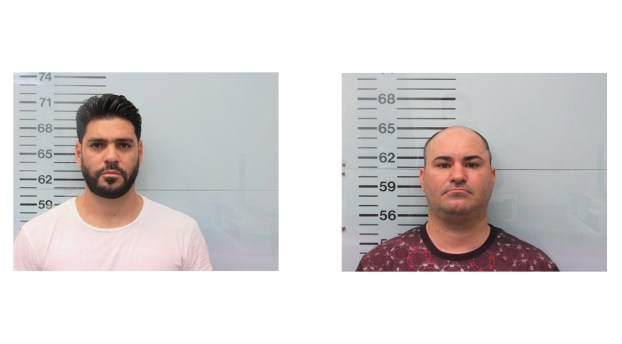 Francisco Menendez, left, and Olvein Botell-Gonzalez, right, were arrested on Aug. 1 in connection to a string of credit card frauds. (Oxford Police Department)

Botell-Gonzalez and Menendez-Baldomero were arrested after they crossed into Mississippi from Tennessee. Both men are from Miami, Fla.

OPD obtained video evidence of the two men working in tandem with each other to withdraw money from ATMs at gas stations and banks using counterfeit cards. It was determined that they traveled in different vehicles, stayed for a short period of time to commit the crimes and then left the area.

At the beginning of the year, Oxford Police Department received a report of credit card fraud from a concerned citizen who still had possession of his actual bank card. More victims would come forward over the next seven months reporting similar incidents.

Upon getting Botell-Gonzalez and Menendez-Baldomero into custody, investigators transported them back to Lafayette County Detention Center along with their rented van. A search of the van and the two men revealed that a large sum of cash, many counterfeit credit, debit and gift cards as well as a set of keys used to unlock gas pumps.

Investigators were also able to identify where the two males were staying in Tunica. A search warrant of the location revealed several additional electronic devices that were used to capture credit card numbers and manufacture counterfeit cards.

It has been determined that Botell-Gonzalez and Menendez-Baldomero were involved in criminal activity within multiple jurisdictions within the state of Mississippi and possibly in other states.

The United States Secret Service have joined the investigation and the case has been referred for federal prosecution in the Northern District of Mississippi.

The Pantry received a $10,000 donation from Oxford-based company Core Logic on Tuesday. The Pantry is a non-profit organization that... read more