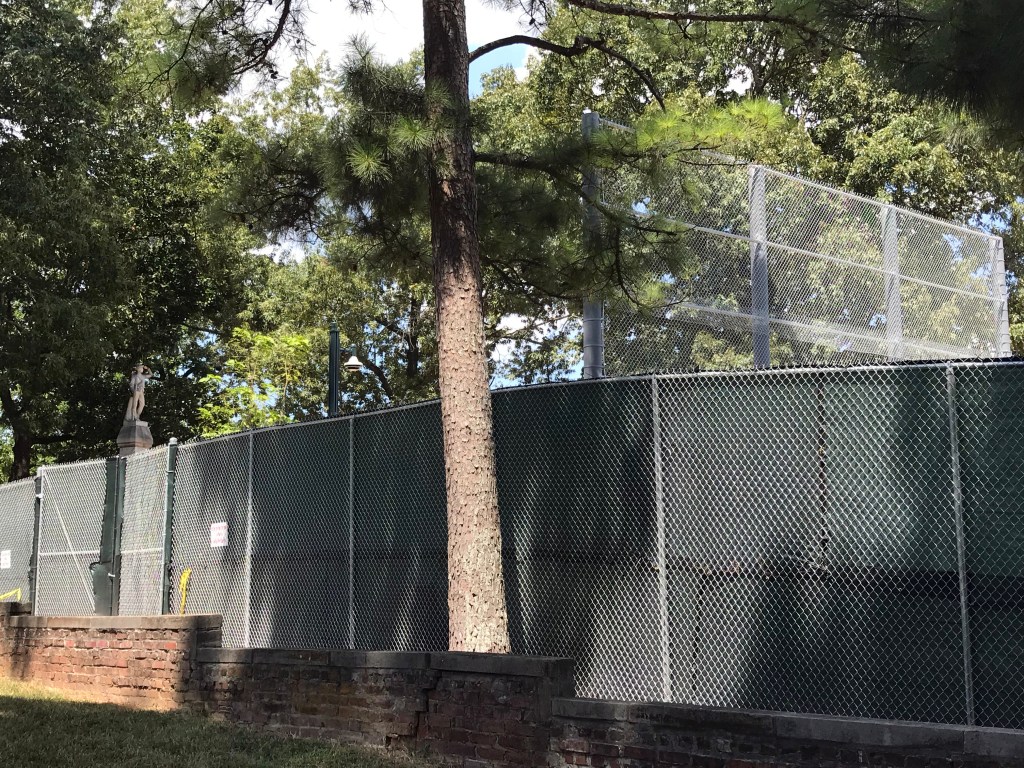 Temporary screening is being installed around the Confederate monutment at its new location at the Confederate cemetery on the University of Mississippi campus. Ole Miss student-athletes spoke with Chancellor Boyce regarding the statue’s vantage point to the football practice fields. Permanent landscaping will be planted later this fall. (Jake Thompson/Oxford Eagle)

A month ago the University of Mississippi relocated the Confederate statue from the Lyceum Circle to the Confederate cemetery behind C.M. “Tad” Smith Coliseum, drawing concern by some regarding its new location.

Some of those who relayed their concerns over the summer were Ole Miss student-athletes, which resulted in large fencing begin to be installed around the statue over the weekend.

Rod Guarjardo, associate director of strategic communications for Ole Miss, told the EAGLE on Tuesday that the screening was only temporary until the relocation project is completed later this fall.

The screening is there to help block view of the statue from the Ole Miss practice football fields, according to Guarjardo.

“Over the summer, Chancellor Boyce met with several student-athletes who expressed concern regarding the statue’s new location at the cemetery on campus in relation to the vantage point from the football practice field,” Guarjardo’s statement read. “In response, the university is installing temporary screen around the monument until permanent, limited landscaping can be planted later this fall, the optimal time of year for the plantings to take root.”

The entire project was estimated to take up to 90 consecutive days, according to documents submitted to the Institute of Higher Learning and the Mississippi Department of Archives and History as part of the relocation process.