Board of Aldermen ask Supervisors for clarity regarding Confederate statue ownership 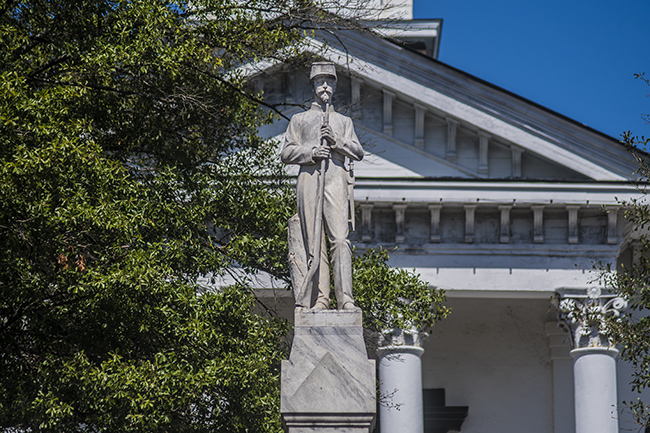 Oxford Board of Alderment sent a letter to the Board of Supervisors regarding questions over ownership of the property the Confederate statue sits on. (Bruce Newman/Oxford Eagle)

The Oxford Board of Aldermen are asking for the Lafayette County Board of Supervisors’ help in clearing up issues related to the Confederate statue located on the Downtown Square.

In a letter obtained by the EAGLE that was drafted by the Board of Aldermen and sent to the Board of Supervisors, it states the County has asked them to provide as much information as they had on the issue which the City did “without hesitation,” but the County had not provided any information regarding its claim of ownership of any property on the Oxford Square.

The EAGLE contacted Board of Supervisors president Mike Roberts for a comment on Friday night, but had not heard back from him as of the time of this story being published.

The letter also went on to say the County had not agreed to set “either a formal or informal meeting” with the city’s Board of Aldermen to discuss the issue further.

A Confederate statue that sits in front of the Lafayette County Courthouse was thought to be the property of Lafayette County, meaning the City has no jurisdiction over the statue. That issue is what the City would like to clear up with the County.

In the letter, the City stated their own research regarding the issue remains ongoing. The City did find minutes from both the County Board of Supervisors and the Board of Aldermen which seemed to indicate ownership of the area in question by the City of Oxford.

Oxford Mayor Robyn Tannehill provided a statement to the EAGLE on Friday night.

“The Oxford Board of Aldermen were contacted by citizens questioning the ownership of the statue and the property on which it sits,” Tannehill’s statement said. “The Board continues to look into this question, and have invited the Board of Supervisors to join them in this important conversation, that affects all of the LOU community. The City’s own research remains ongoing, and we have asked the County to share any information they have about ownership of the parcel with the City, and with our broader community. Our hope is to be able to sit down with them to discuss our findings in the near future.”

The Board’s letter goes on to say in May of 1868, the Lafayette County Board of Police, which preceded the Board of Supervisors, conveyed “that portion of the County property know as the Public or Court Square” to the governing authorities of the Town of Oxford “in fee simple forever.”

In the aforementioned agreement, the conveyance called upon the Town to repair, maintain and apply its ordinances to the Square. The agreement also hinged on the Town of Oxford to convey the property back to Lafayette County if it requested the same for construction of a new courthouse, provided the County repaid the Town for it’s expenses in repairing the Square.

The City’s research has provided no evidence that the County ever asked the City to convey any portion of the Square back to the County, either before or after the new courthouse was built in 1872, or that the County sought to repay the Town for its expenses in repairing the Square, according to the letter.

The Board of Supervisors held a surprise vote during their July 6 meeting, which was not on the agenda ahead of the meeting taking place, and unanimously voted to leave the statue where it currently resides. The vote came after a public discussion was held by the Board of Supervisors earlier in the summer amid public protests to have it removed.