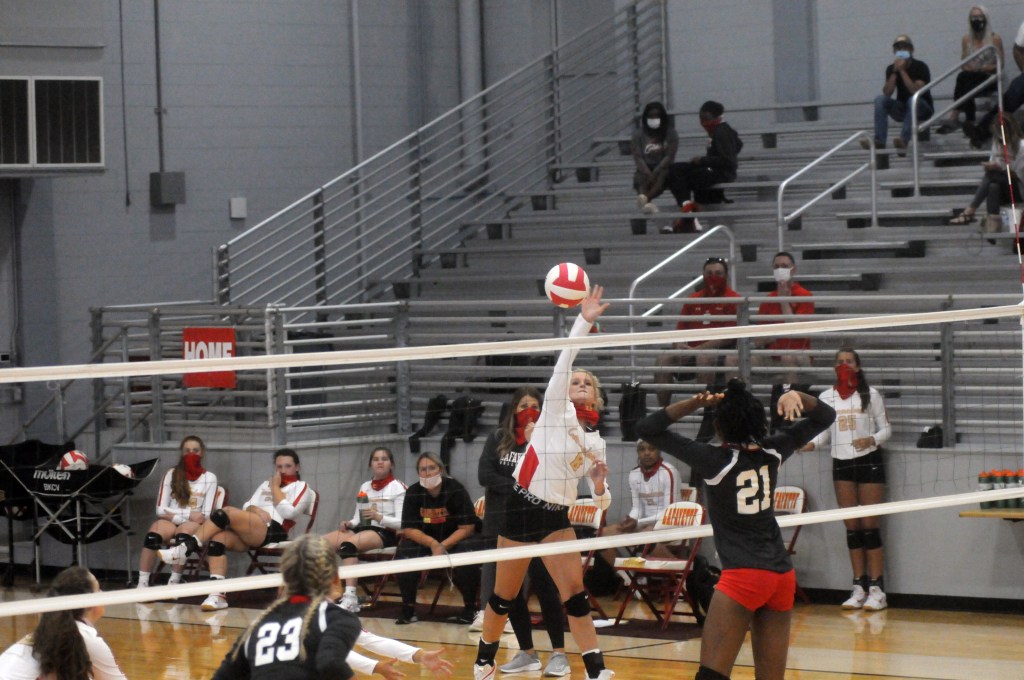 Water bottles with names on them, wiping down balls that go out of play and facial coverings worn during play.

The Mississippi High School Activities Association officially began its 2020-21 athletic year on Monday with a very different looking start to the volleyball season.

Lafayette hosted South Panola in their home and season opener, sweeping the Tigers 3-0 (25-10, 25-8, 25-15) inside the LHS gym. Fans were socially distanced and masks were worn, providing a unique environment in what will surely be the most unique high school athletic season due to COVID-19.

“It’s little things that have to be adjusted and they’re really not that bad,” said Lafayette head coach, Kelsie Poole, after the match. “It took me two seconds to spray that ball and wipe it down. The water bottles, we would have those anyway but now they just have their own bottles.”

Once the match got underway, the Commodores (1-0) took a few points at the start of each set to find their footing but would eventually manage to pull away from the Tigers (0-1).

The season was delayed by a couple weeks by the MHSAA due to the COVID-19 pandemic and the surge in cases towards in late July. The Commodores and every volleyball team were able to begin preseason practice on Aug. 10, but were ready to play someone other than themselves and in a match that had meaning to it.

“We’ve been ready to play a game for a while,” Poole said. “Since everything got shut down in the spring, it is so nice to actually play a game. We were saying today that this was the first game (to be played) in a while. So, the kids were excited and I’m definitely excited.”

The third set saw the match get tight with the Tigers hanging with the Commodores longer than they did in the first two sets. With a 10-9 lead, the Commodores found some momentum and closed the match out with a 15-6 run.

Before the match-clinching run, Poole called a timeout to settle her team down and regroup.

Lafayette match on Thursday against Horn Lake was postponed. The two teams will now play on Sept. 15 with Horn Lake coming to Lafayette. It is just an example of how fluid the season, and all sports’ seasons, will be this year due to dealing with the unknowns of COVID-19.

“Just having to adjust,” Poole said. “It’s just one of those things where a game gets canceled you start calling (teams), ‘Hey, you have an opening?’ We want to play. We don’t want to cut anymore games. We want all those game.”