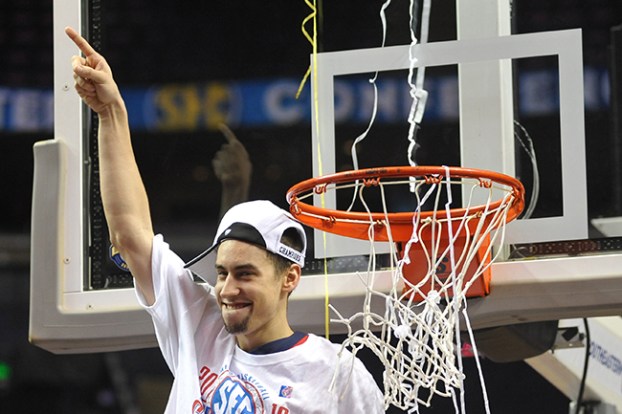 Ole Miss' Marshall Henderson (22) cuts down the net vs. Florida in the SEC championship game at Bridgestone Arena in Nashville, Tenn. on Sunday, March 17, 2013. Ole Miss announced on Tuesday the return of Henderson to the program as a graduate manager.

Marshall Mania is coming back to Oxford.

On Tuesday, the Ole Miss men’s basketball program announced Marshall Henderson is joining Kermit Davis’ staff and will serve as a graduate manager.

Henderson helped the Rebels win a SEC Tournament championship in 2013.

“We love having our former players back to Ole Miss to pursue their master’s degree and further their coaching careers,” Davis said. “We are excited to have Marshall back with Ole Miss Basketball and join our program as a graduate manager. In talks with Marshall, you can tell his great passion for basketball and working with young people.”

In his two seasons at Ole Miss, Henderson gained national recognition for his intensity on the court. He made at least one three-pointer in all 66 games as a Rebel, setting an Southeastern Conference record. Henderson made more three-pointers than any other Rebel player in a single season, hitting 138 as a junior, which was an SEC record at the time.

“Of course, I am thrilled to be back in Oxford,” Henderson said. “The people here have been more than wonderful to me for a long time. Anything I can do to help the basketball team continue their success, I will do to the fullest of my ability. I am very excited about getting a master’s degree. When I was an undergrad academically, I wasn’t as focused as I needed to be, and this position gives me a path to make peace with myself on that front.”

After graduating from Ole Miss, Henderson spent five years playing professionally around the world. He signed with the Sacramento Kings prior to the 2015 season and joined the organization’s development league (G-League) and also spent time playing in China, Italy, Iraq and Qatar.

Henderson turned to coaching in 2018 at Birdville High School in North Richland Hills, Texas. Last year, he was an assistant coach at Thomas University, which is an NAIA school in Thomasville, Ga.

Water bottles with names on them, wiping down balls that go out of play and facial coverings worn during play.... read more