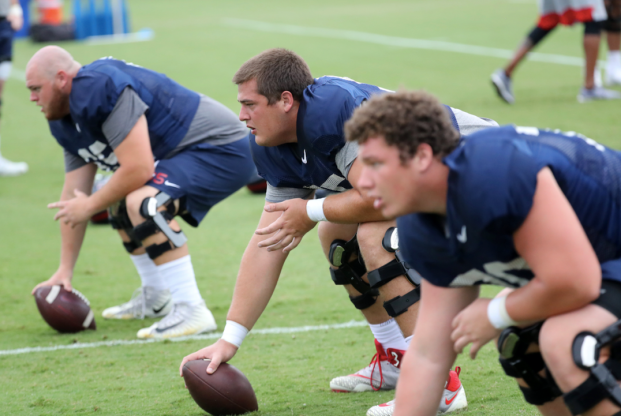 Ben Brown, middle, is taking reps at center as the possible replacement for Eli Johnson who opted out of the 2020 season ahead of fall camp beginning last week. (Joshua McCoy/Ole Miss Athletics)

One week is in the books in Ole Miss’ 2020 fall camp and it was a notable one with Lane Kiffin getting to see his players in a practice environment for the first time since being hired eight months ago.

Kiffin also had an unexpected task to accomplish hours before the first practice last Monday with Eli Johnson opting out of the 2020 season, leaving the Rebels without a starting center.

To fill that void in the middle of the offensive line, Ben Brown was moved over and took most of the reps at center during the first week of camp. Rotating around the line is not anything new to Brown, who has become accustomed to helping out wherever he can in a group that has been plagued by injuries at different times of the season in recent years.

“”It’s going great,” Brown said following practice last Friday. “I have a little bit of experience from last year. I think it was about 99 snaps or so. It’s not something completely new, but I’m still getting my feet kind of underneath, because we haven’t been in pads since April. It’s been about nine months since we’ve been in pads. It’s a little bit of adjustment for sure, but it’s nothing new.”

Brown is also still getting some work at right guard, where he played and started all last season.

The Rebels held their first scrimmage on Saturday inside Vaught-Hemingway Stadium and Kiffin was very complimentary with out the offense play, specifically quarterback Matt Corral’s performance.

Corral is in the midst of a quarterback battle with John Rhys Plumlee, but after Kiffin’s comments on Monday regarding the scrimmage, Corral may have the first advantage of fall camp.

“I thought Matt played extremely well,” Kiffin said. “He hit some big plays and was really accurate. John had a little more up and down. He did some really good things…Both of them did some things to excite us.”

Kiffin was also asked if Plumlee was being worked out at any other positions in case Corral gets the starting spot. Kiffin downplayed that idea and said the Oak Grove product is taking snaps only at quarterback, citing Plumlee is in a competition and if he took snaps elsewhere it would hinder his progress at the quarterback position.

Running back Jerrion Ealy also had a big run during the scrimmage according to Kiffin, but with the offense playing well, it meant the defense did not perform at the same level as the offense did.

“Well, we struggled to line up,” Kiffin said of the defense’s performance. “We go ultra fast on offense, especially once we get to a Saturday format where there’s not periods broken down. At practice, we go slower at times, and we don’t in a game. I think that was an adjustment for them that they struggled with, so we’ve got to work on that. Then guys stepping up with guys out for multiple reasons, especially our DBs are really shaken up, some with injuries and some with corona issues.”

Ole Miss opens the season against Florida on Sept. 26.

Water bottles with names on them, wiping down balls that go out of play and facial coverings worn during play.... read more