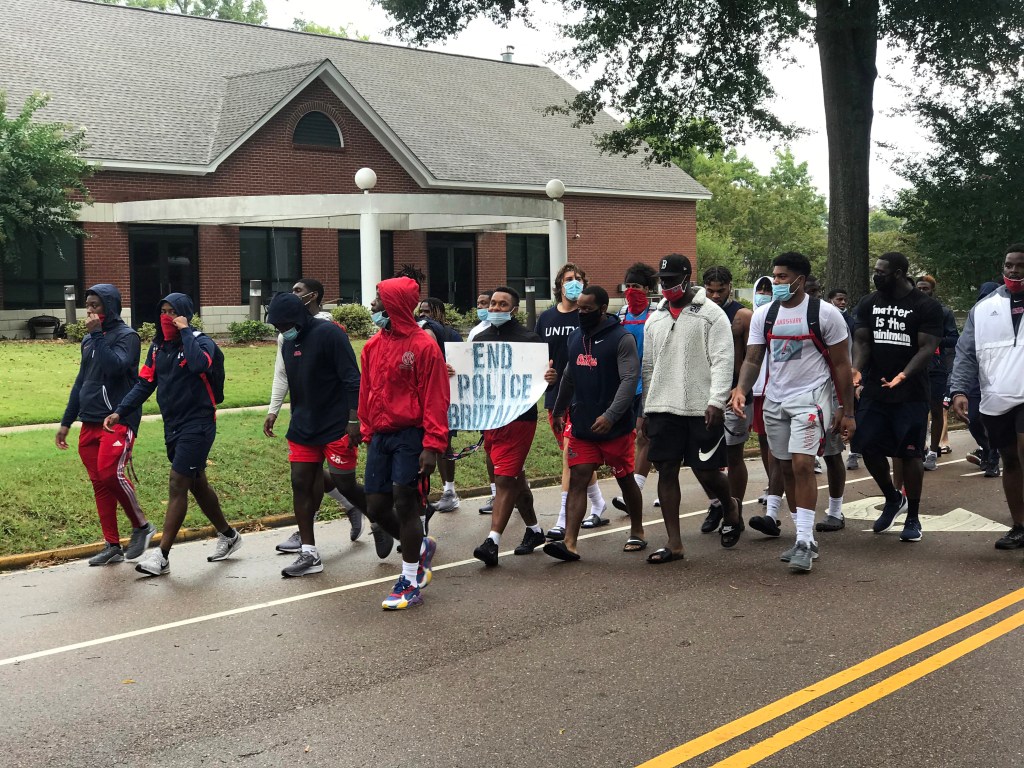 Ole Miss football players march up University Avenue from the Oxford Square back to the University of Mississippi campus after boycotting Friday morning’s practice. The boycott was in the wake of the shooting of Wisconsin man Jacob Blake by a police officer earlier this month. (Jake Thompson/Oxford Eagle)

The Ole Miss football team opted to not take to the practice field on Friday morning, but instead took to the street in another sign of solidarity.

Under the threat of tornadoes and rain from the lingering Tropical Storm Laura, Ole Miss players marched from the University of Mississippi campus to the Oxford Square after boycotting practice. The reasoning for the march was against police brutality in the wake of the shooting of Jacob Blake, a Wisconsin man who was shot seven times in the back by a Kenosha police officer earlier this month.

Ole Miss’ sit out came after several college football programs across the country did the same thing on Thursday afternoon. Mississippi State went to Unity Park in Starkville instead of practicing on Thursday.

Earlier this week, Ryder Anderson was asked about the Jacob Blake shooting and if it had been discussed in the locker room.

“We haven’t talked about it altogether as a team, yet,” Anderson said on Wednesday. “But, we’ve talked amongst ourselves a little bit. What happened was completely inexcusable and that’s why you see everything that’s going on right. That’s why everyone’s so frustrated. Because that stuff’s been happening and continuing to happen. That’s just something we’re going to have to continue to fight against.”

Friday’s march was not the first time Ole Miss players have spoken out about the issues of social injustice. Earlier this summer, the athletics department held a Unity March on campus where players were able to speak, along with athletics director Keith Carter, football head coach Lane Kiffin and women’s basketball head coach Yolett McPhee-McCuin.

Kiffin joined his players during Friday’s march to the Square.

Anderson has been one of the football players heavily involved in the marches. Alongside linebacker MoMo Sanogo, the pair helped organize the LOUnited March in July in response to police brutality and in protesting the Confederate Statue on campus.

College football is not the first to boycott practices as the NBA saw teams sit out on Wednesday and  Thursday, not playing their scheduled playoff games. The MLB had teams do the same as did the NHL. NFL teams opted to not practice this week.