The unlikely father/son relationship of Tim Turner and Cordarius Anthony 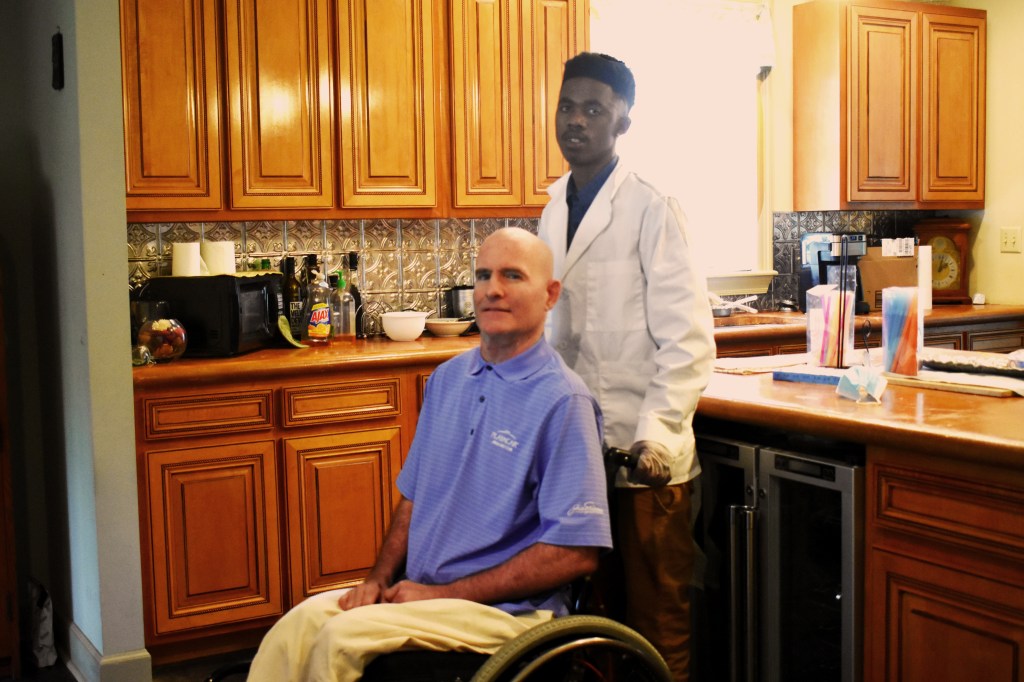 Cordarius Anthony (right) has been helping Tim Turner (left) since 2017. The two have formed a father/son bond that goes beyond skin color and genetics.

Family is not always made up of what one was born into but rather the people who one chooses to have in their lives. At least that is the case for Tim Turner and Cordarius Anthony.

Turner met Anthony after placing an ad online looking for some help. Turner was diagnosed with Multiple Sclerosis at the age of 28 and has had numerous people come in to help him out over the years.

“Some have been great,” Turner said. “Others have tried to rob me blind.”

Turner mentions that there are days where he has sent someone out with his credit card to get something for him.  One woman in particular, he has sent out to get him a new cell phone. She ended up taking his information and went out to buy her and her daughters brand new cell phones on his account.

Turner says that it has been hit or miss when it comes to hiring people to help him out. When Anthony started those worries of hiring someone trustworthy vanished. Especially when he learned that he could trust Anthony.

“He told me that someone was with him and they were trying to get him to put something on my card,” Turner said. “He said, ‘I can’t do that. That’s my dad’s card.’ That’s when we really became more than a work relationship.”

Anthony grew up in a rough neighborhood in Alabama. His mother and stepfather were constantly throwing him out of the house. Anthony would spend his nights either at someone else’s house or on the streets.

One night, two months before he was to graduate from high school, his step father’s brother’s wife happened to be there when his mom and stepdad threw him out. She saw him and gave him a ride back to her place. The couple let him live with them and even helped him get into college.

“My grandma put me through college,” Anthony said. “I went for a CNA. I got my nursing degree. I went from 2014 to 2017 and became a certified nurse’s assistant.”

When Turner and Anthony met in 2017, it was through an ad on an Oxford job search. Anthony has put in several applications at nursing homes and the hospital but never got a call back because he was certified in Alabama. It was by chance that Anthony’s fiancé happened to see the ad that Tim had placed on a job searching website and reached out to him to see about getting Anthony an interview.

“I came over and I met him,” Anthony said. “From then on I’ve been working for him.”

Anthony doesn’t see himself as being employed to help Turner, but rather as Turner is his dad and he’s helping him. Tim sees it the same way. He considers Anthony as a son.